It’s easy to forget how big the United States is, and how different it can be from town to town. When you’ve lived on one of the coasts for a while, your city can sometimes trick you into thinking all cities are alike, even when they’re not really cities at all. Or, if you think the some parts of the country might be different, you have this picture from a country song, all dirt roads for driving trucks down on a moonlit Saturday night, home style BBQ, a local bar.

I got to Jennings in early afternoon. It’s about 30 miles east of Stillwater, just north of Mannford, which maybe you haven’t heard of.

The population of Jennings is 363 people, a booming metropolis compared to Black Hawk, CO. Or at least one would think.  According to Yelp, Jennings has one cafe. I drove down the main street (also known as the only street). The cafe was closed. Its Facebook page tells the story.

The rest of the street didn’t look any more promising. 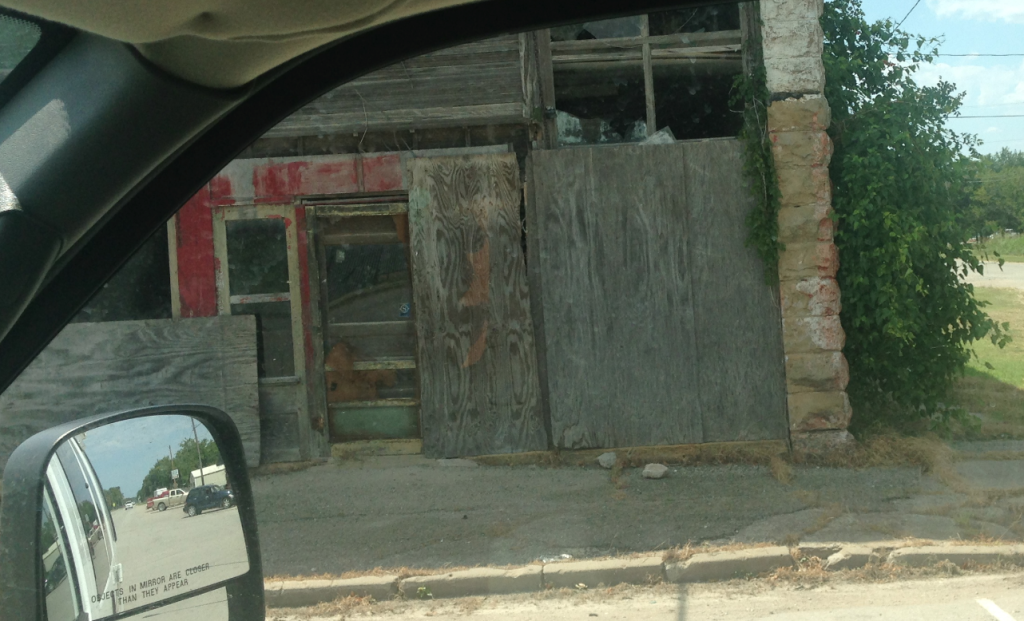 We moved to Jennings when I was in the second grade. The school had three classrooms and three teachers for grades 1-6, so two grades doubled up in each room. It was like the 1970s version of the 1800s one room school house.

My classroom was set up like a split screen: first graders on one side of the room and second graders on the other side. The teacher would get one side started on something, then switch to the other side, like spinning plates only with little kids and paste.

As an overachiever, I had really rocked first grade, so I ended up spending a lot of my time helping out on first grade side while the teacher was occupied with the second graders.

There’s an entirely new elementary school there now. I don’t know why I expected the old school to be there. In addition to having half as many rooms as it needed to have,  my stepsister  and her classmates in the third/fourth grade room had to wear their coats and gloves while in class in the winter because of the unpatched holes in the walls and floor.

I think every grade has its own room (and teacher now too), from what I can tell from the school web site. Where I also discovered that about 80% of students get a subsidized lunch. All I remember about those lunches is the canned beets that would bleed into my mashed potatoes, ruining the whole thing. And if you know me, you know that’s a mashed potato tragedy.

I drove out of town a couple of miles, passed our old house. The garage my parents built was still in front.

And then I swung over to Mannford, that town you’d never heard of. For third grade, I went to school there, at the school at our church. I was thinking I might have lunch there, since the J Cafe didn’t work out. According to Yelp, my only 5 star option was Sonic Drive In.

Another choice was Freddie’s Steak House, about which a Yelp reviewer said:

“I’m shocked that this place has any decent reviews at all. It so old, run down, and horribly ran that I don’t see how they’re in business. I would avoid eating or drinking anything in this establishment considering it’s not at all clean. Not to mention, they have a dog that hangs out in the kitchen and I personally saw a dead deer carcass in their walk in while I was living in mannford. If you don’t mind the high risk of food poisoning every time you walk through the door then by all means become a regular at this place, but I wouldn’t personally put the food in my body. Also, one of the only bars I’ve ever been in that doesn’t cover their bottles of liquor at close every night. There’s no telling what kind of dead bugs are getting mixed into their beverages.”

So that was kind of disturbing.

Although having lived in lot of places where people are seriously into hunting, it doesn’t seem all that unreasonable that someone thought it was a good idea to store the deer from their latest hunting trip in the walk in.

Another reviewer wasn’t as concerned about the food: “The food is bland and unorginal yet it  truly shines compared to the detestable service. ”

Or, I could go to Jones Family Diner, for which the reviews mostly talk about food poisoning. Also, this didn’t sound great: “I don’t think they’ve cleaned their fryers in a while because we got some nasty fried globs of “something” in with the tater tots, which, BTW, were not crunchy.”

I’ll give you one guess where I had lunch.