That photo above is what I woke up to on my phone this morning. I’m very confused. It should never feel like 12 degrees.

A couple of days ago, I was in Hudson, Ohio, and it was 73 degrees. From there, I ended up at Indiana Dunes State Beach, and OK, maybe it wasn’t summer, but it was a lovely, crisp fall: autumn leaves, clear blue skies. Scarf and boots weather. Low 60s maybe. 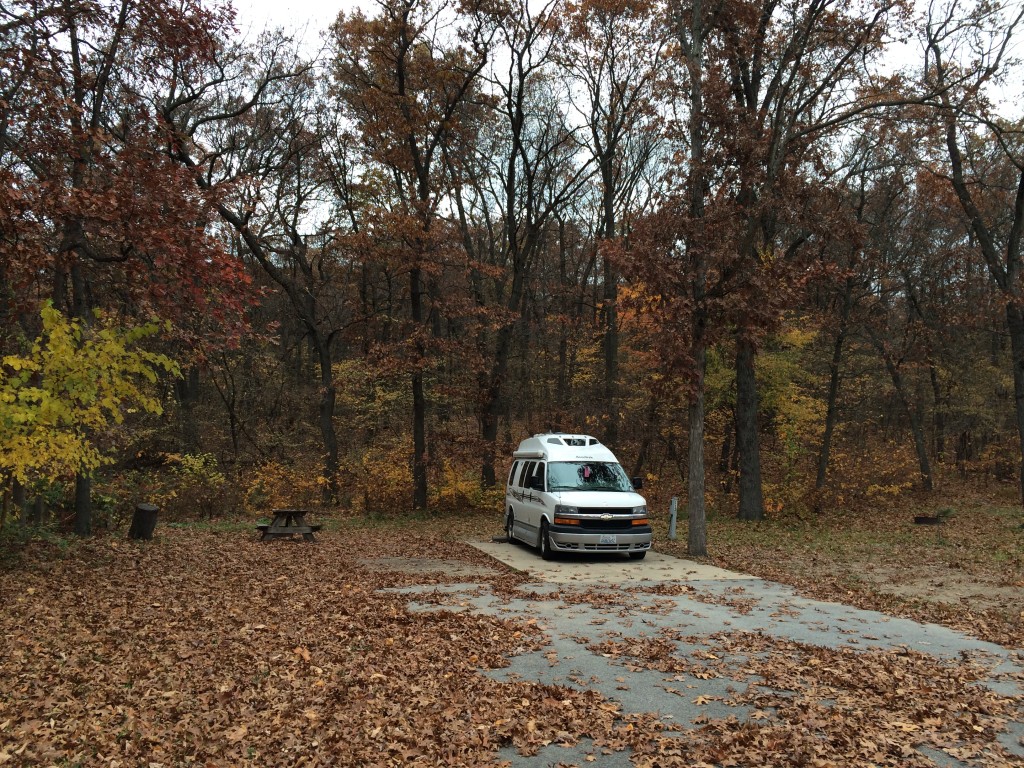 Even though I knew that I was in the middle of North America, Indiana did a pretty good job of convincing me I was at the ocean.

The beaches of Indiana…

Being the off-season, it had the air of an abandoned ghost town. I pulled my mobile office into the empty parking lot and worked all afternoon. 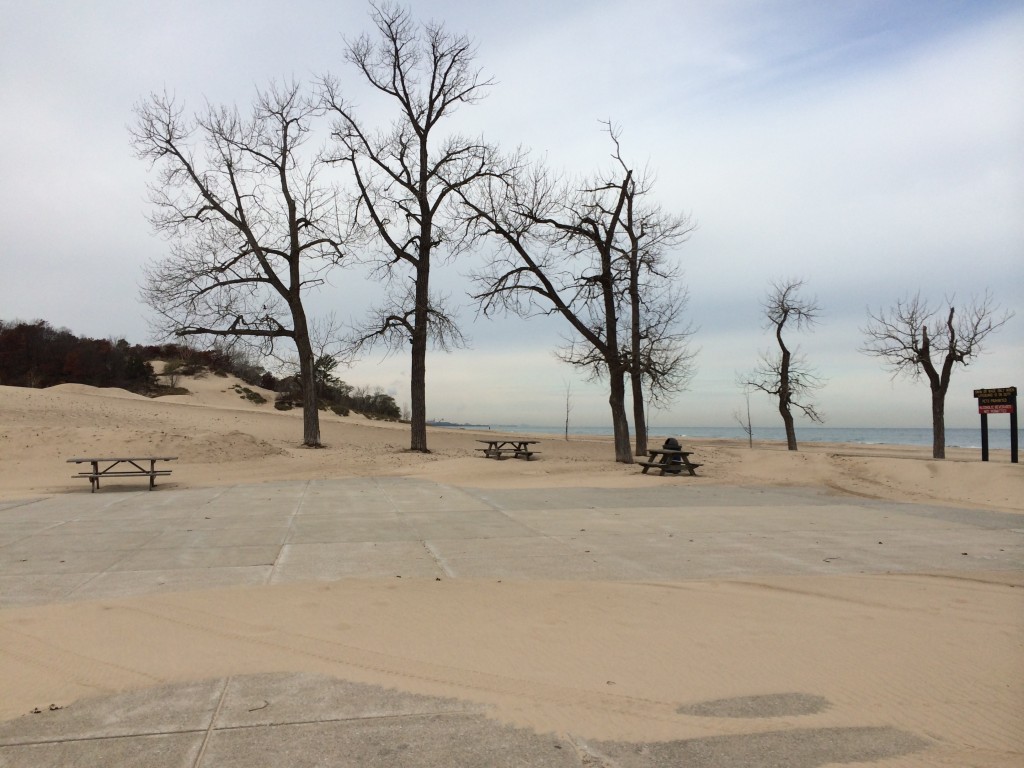 Eventually, I ended up in Madison, WI.

You might think my life is all beaches and wifi, and sometimes that’s true, but my route from Indiana Dunes beach to Madison went like this:

First, a meeting in Illinois (the Indiana campground had a great shower and I showed up to see people in person looking like an actual professional and not a wandering hobo. I think).

The person I was meeting with had told security I might need extra room when parking and when I pulled up to the gate, they had an escort waiting for me and brought me to several spaces they had reserved with traffic cones. So that was fairly awesome.

Next, I had a few work projects that I really needed to complete, so I parked in an Illinois travel plaza (which is basically a mini airport terminal without the airport and instead with just the Aunty Anne’s Pretzel place and the Starbucks and the weird kiosks selling cell phone accessories and earrings and it is built over a highway and also there’s a gas station). Not the most glamorous way to spend the afternoon, so maybe I should have left that part out.

I had a call with a client in Australia in the evening, but I miscalculated the time zone difference (crossing time zones plus calculations to a time zone that’s tomorrow plus Google Calendar coming up with times that are even more wrong can do that) so I got the call as I was driving down the road, listening to the latest Welcome to Night Vale episode (come home Carlos!).

I pulled into a strip mall parking lot in the dark, and balanced my open laptop on the passenger seat. Call complete, I drove on. I needed gas so I pulled into a Travel Center (which is a particular brand of truck stop). As you all know, I love truck stops. As I’ve written about here before, I feel really safe, they have great showers, hot coffee, groceries, and whatever else I might need. Like a kettle powered by a cigarette lighter.

I generally stay at Pilot’s/Flying J’s or Loves, since they specifically cater to RVers (dump stations, propane fill up, loyalty cards, Good Sam discounts, and most importantly, they have official overnight parking policies that explicitly welcome RVers).

Even though I often see Travel Centers included in lists of truck stops with overnight RV parking available, I’ve never stayed at one. Their web site doesn’t say RVers can stay overnight, just that they have ample parking if you stop for a meal break.  But, clearly they are cool with trucks staying overnight, as a ton of them were parked out back. And this was a full-fledged truck stop with showers and laundry and a gym. Also, it was nearly 9pm. So I pulled into a corner. Right beside the sign that told me I was welcome to park for up to four hours. Thanks for nothing, Travel Center.

My AllStays app noted a couple of Walmarts not too far away that supposedly allowed parking, but some commenters noted no overnight parking signs. I don’t know if I’ve mentioned this here before, but I really, really hate being somewhere I’m not supposed to be. Some people are invigorated by the thrill of getting away with something. I get anxious and have to take a Xanax.

What? What does that even mean?

Which is what I said to him, basically. He said he was a bit hazy on the details, but he thought that the city had passed an ordinance that RVers couldn’t park there overnight but that they never tell people no and that in fact, a trailer was out in the  parking lot right now that had been there for about six weeks. He thought maybe they lived there! And no one had told them to leave. So that didn’t seem like an ideal situation from any angle.

I called the next Walmart on the list. The woman I talked to said that yes, I could park there, but I would have to come in and give them my license plate number and driver license information and they would call it into the police to “register” me. Also they were closing soon. I asked if they could just take that information over the phone since I might not make it there before closing. She told me no, it had to be in person and then gave me some rambled explanation about stolen cars?

I pulled out the app again. A state campground was only a couple of miles from me and according to the web site, was still open for the season. As readers of this blog know, I try to avoid getting to a campground in the dark, but I figured this was worth a try. It was, in fact, completely dark when I pulled in. And then when I got to the campground, gates barred the entrance. Which really didn’t seem like a good sign.

Back to the app. A KOA was about 10 minutes away, and didn’t close for the season for two more days. Here’s the thing about KOAs. They are nothing if not reliable. With most campgrounds and RV parks, who knows what might happen when you get there, particularly after hours. A KOA will have a night registration area with all available sites clearly marked. KOA it was. It was a tiny KOA right off the highway: just a wide open field with RV sites. Perfect.

I filled out the card, put some money in the envelope, and dropped it into the slot. It was a little chilly and just starting to rain. I went to sleep, happy for a place to stay. I woke up to a light dusting of snow and an ice-covered RV.

HOW WAS IT SUDDENLY WINTER? 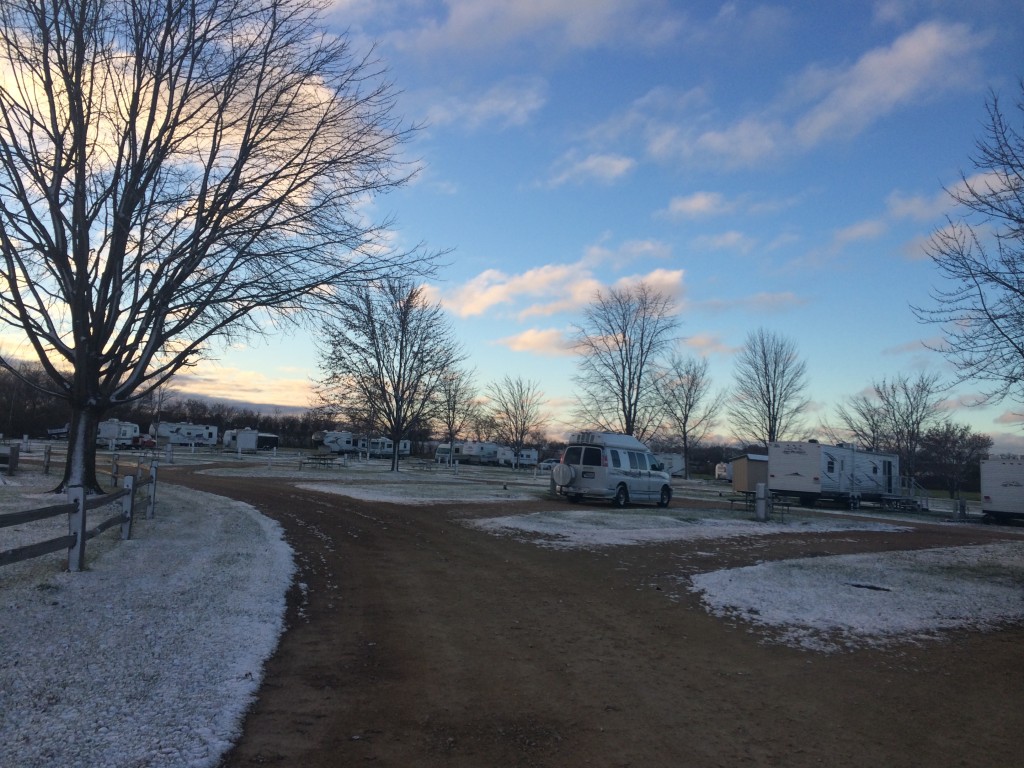 In a different lifetime, I lived in Madison, WI: newly married, a job writing API documentation in the telecom industry, sure my life was set in stone. I was 24. (Insert older, wiser, and jaded laugh here.) But one thing I brought with me from that lifetime to this one? The knowledge that Madison has a Lands’ End store.

I had another call with a different client, and thought I might just have enough time before to run in and stock up on things that are warm. I really, really needed some things that were warm. I did speed shopping, Lands’ End style, and got back to the RV, bags full of warmth in hand, just before the call was supposed to start. So I once again balanced the laptop on the passenger seat and had the meeting from a parking lot.

I thought I was driving away from the cold, but it just kept getting colder. I stayed at an RV park that night, but mostly just used it for the parking space, since it was too cold for the heat pump and I had to use the furnace. (The heat pump runs on electricity, so requires that I’m plugged in, but the furnace runs on propane, so I can run that anytime. The heat pump blows only cold air once it dips to around 35 so it was of no use to me.

Aside: when the technician at the RV dealer went through orientation when I picked up the RoadTrek, I noticed that the thermostat had both a heat pump and furnace option. I asked him what the difference was and he looked at me like a deer in headlights and changed the subject.)

The next morning (that of the feels like 12 degrees noted above), I did some laundry and checked out the vast collection of romance novels available in the laundry room.

I really don’t want to kiss you Bob. I don’t want to kiss you either, Alice. Like at all. Not even a little bit. But the evil kiss magician is watching. If we don’t kiss, he’ll cast a spell that will make us sleep for a hundred years. A hundred years of sleep? Eh, that doesn’t seem so bad. If it means I don’t have to continue this highly awkward embrace. A photo posted by vanessajfox (@vanessajfox) on Nov 11, 2014 at 8:33am PDT

I drove a while, found a coffee shop in a little town where I had some lunch and got some work done, and then drove a little more. But really, what I wanted was a nap. I had no use for an RV park: my laundry was done, I would keep warm with my propane-powered furnace, and the last two parks I’d been to had shut off the water at the sites for the season, so I couldn’t fill my tank even if I needed to.

I saw that a state campground that was open all year was not too far ahead. And here I am.

Here’s the thing. I paid $27 for the night.  It’s only $27. It’s not a big deal. But it also seems kind of dumb. The ranger had told me that the water was off for the season, which fine, I have plenty of water in my tank. But I guess he meant all the water in the park, not just the water at the sites, because the bathrooms and showers are locked up tight. I’m not using the electricity, so I’m basically paying $27 to park here vs. parking at Walmart for free.

Yes, it’s a lovely view, although I’ve had lovely views at Walmarts too. Here are pics of a couple of my favorites.

At this Walmart, I parked by a peaceful stream, beside a quiet picnic area: 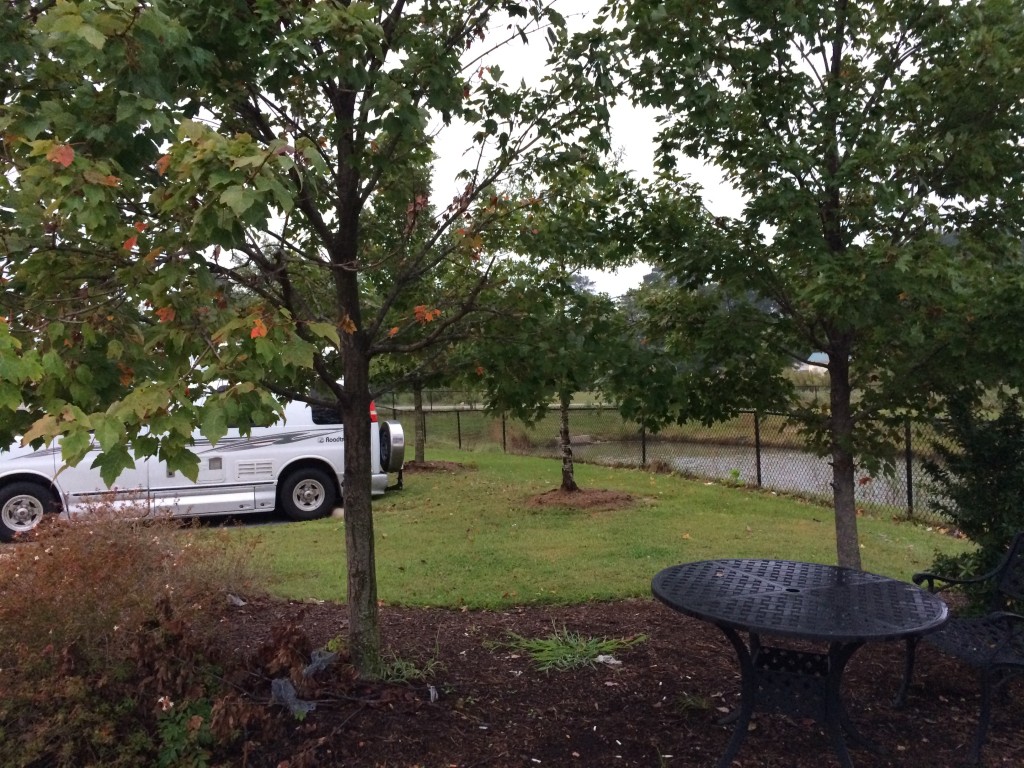 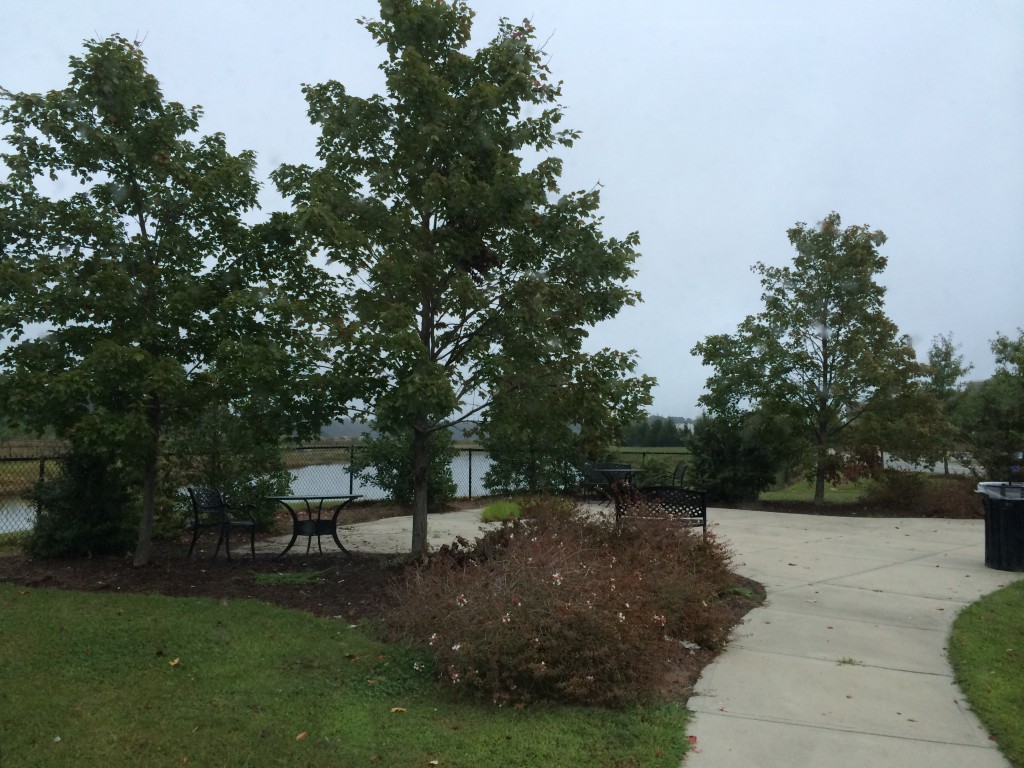 At this Walmart, I was right on the water (you can see the little “exit” sign on the back window, which for some reason I find hilarious and therefore haven’t taken it off):

And it’s seriously too cold to go out exploring or hiking or whatever I might do to enjoy being in nature vs. at a Walmart.

When I got here, it was completely empty but a truck camper, a popup van, and a group with a tent have all arrived since then, so now the place is only mostly empty. I’m pretty sure I’m the only one here with my own bathroom so I’m not sure what everyone else is doing. I especially am not sure how the tent campers are going to make it through the night without freezing to death.

It’s pitch black outside though, so I can’t tell if anyone’s still out there. Maybe they’ve given up and have gone home.

In any case, I did take a lovely nap, and I have full 4G bars, so I got a little work done and might even watch a movie later. I’m toasty warm. I have the furnace set to 75 degrees.

This is what it looked like before the pitch blackness: 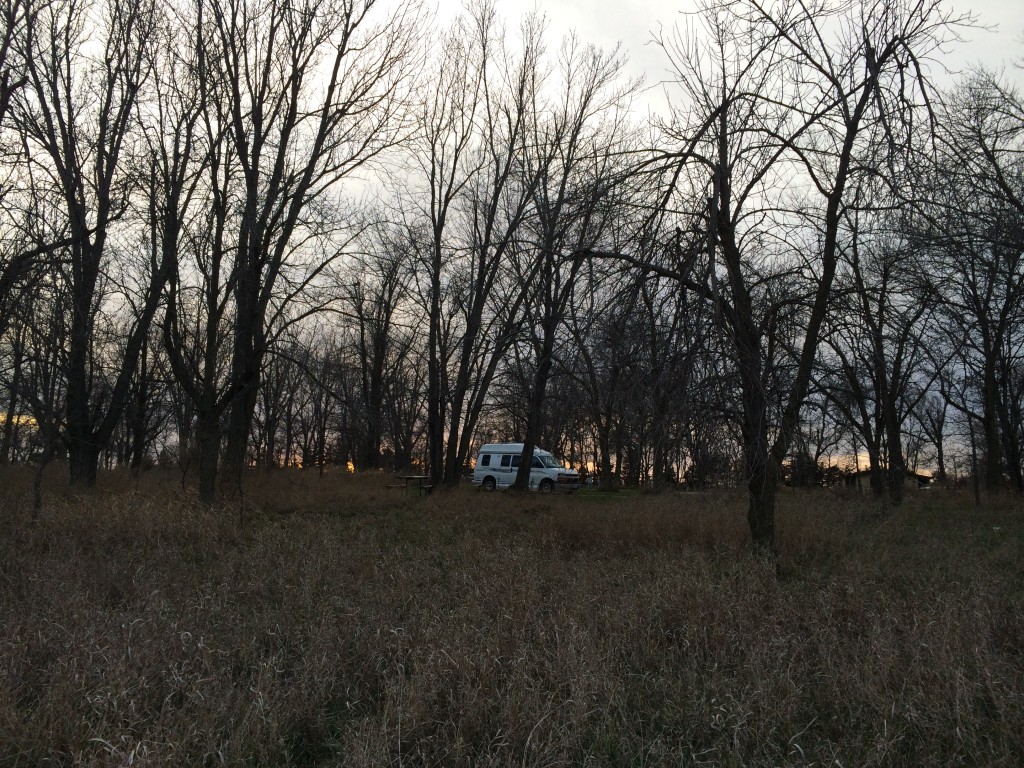 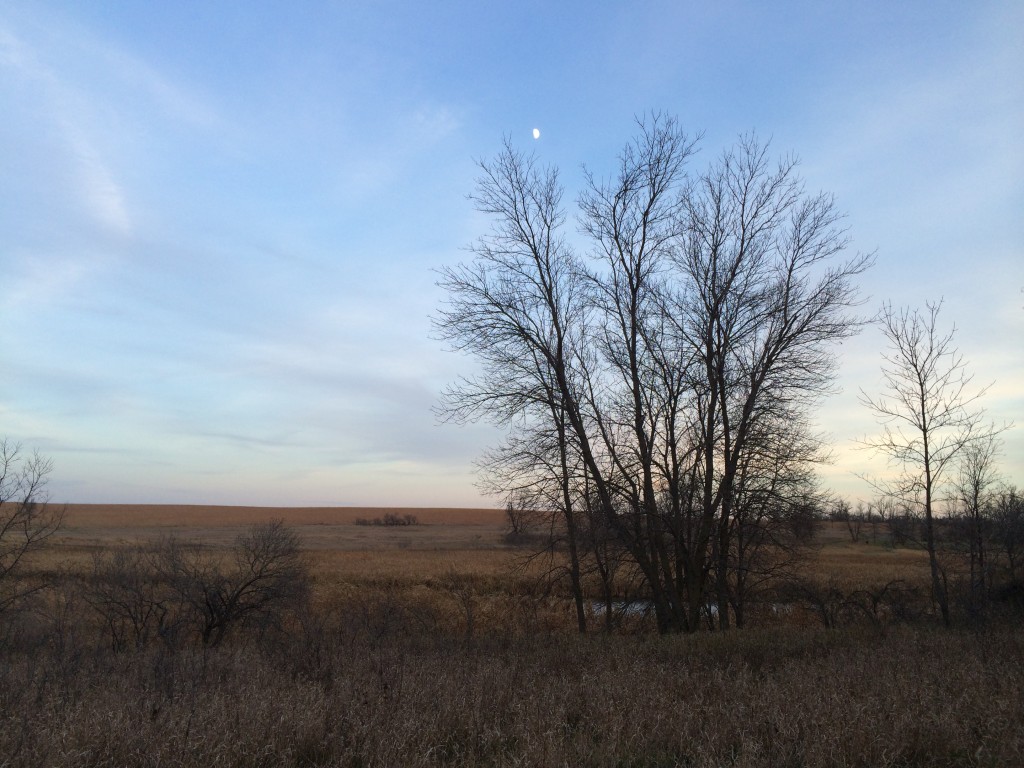 Tomorrow, I’ll bundle up in my Lands’ End finds and maybe check out this dispersed (free of both cost and amenities) camping spot near the South Dakota badlands.

4 thoughts on “A Few Days In the Life. The Cold Life.”