I know what you’re thinking. What about the septic system? You’re driving around with an entire plumbing system, including a toilet, in your car. And at some point, the tanks fill up. No. Surely there’s a way to outsource taking care of that?

I wondered about that too. Before I set out, I read all kinds of warnings about keeping a box of latex gloves handy and the chemicals needed and the indignity of it all. Also that it’s a two person process, which seemed problematic for me as a one person team.

Turns out, like nearly everything else, I’ve discovered that it’s easier than I expected. (Also, when you’re traveling around the country, it’s sort of awesome to always have a bathroom with you.)

The Roadtrek (like all RVs) has two tanks: the grey tank (for the sink and shower) and the black or holding tank (for the toilet). Since I have the littlest Roadtrek, I also have the littlest tanks, but since I’m only one person, I only need to find a dump station about once a week or so (a very unreliable status indicator keeps track of when the tanks are full).

This is one time I can’t steal ideas from watching RVers around me. Many RV septic systems operate by way of gravity. You put the hose in the right place and open the tanks, and as long as gravity is on your site, everything empties as it should. There’s all kinds of little feet you can buy that make the sewer hoses look like oversized millipedes to get the hose to just the right angle. 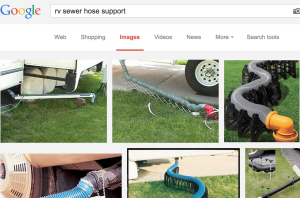 This set up means that when most RVs pull into a site with full hookups, they just hook up the sewer hose and leave it open the whole time they’re stopped.

My Roadtrek has a macerator, which is like a garbage disposal for the septic system. So the tanks only empty when the macerator is on (and it’s only on when I’m pressing the button). Which means I never really need a site with full hookups. Lots of times I get one, just because it’s easy or because that’s what’s available, but a site with only electric and water works just as well for me. I can use the park’s dump station on my way out just as easily as I could a hookup at my site.

Dump stations are everywhere. Rest areas, truck stops, RV service shops. You can stop by a campground or RV park you aren’t staying at and use their dump station for a fee.

I had read about long wait times at dump stations (which I can definitely see happening since it’s a 10-15 minute process), but so far, I’ve never encountered anyone else at one.

See that little square on the left with the black cap (in the photo on the right)? That’s the septic hookup.

I mean, yes, you might want to wear the gloves just in case. And probably you want to wash your hands now. But honestly the worst part is holding down that red button for ten minutes. You’re like, really? I have to keep pressing this very inconveniently located button? And yes, yes you do. I guess I could put some duct tape over it instead of pressing it? I’ll try that out and let you know how it goes.

Another problem? Sometimes you can’t see the clear part of the hose so you can see if the tank is still emptying (I guess this is where the second person comes in handy. 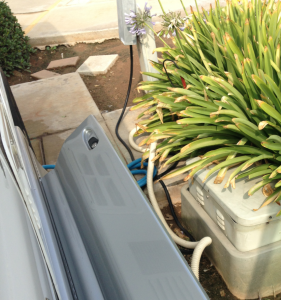 I really thought I had gotten the hang of things. And then I got to Tenkiller Lake. I pulled up to the dump station. And had no idea what to do next. I saw this big square metal hole. And a sign telling me to turn on the water. I looked around. What now? The guy in the RV behind the dump station noticed the perplexed look on my face. Just put your hose into the hole and turn the water on, he told me. What?

So I did. If you look closely (which I realize perhaps you don’t want to do), you’ll see that water is pouring from the sides of the square hole, filling it with water and wooshing everything out into the unknown. No, I don’t know what the barrel is for either. 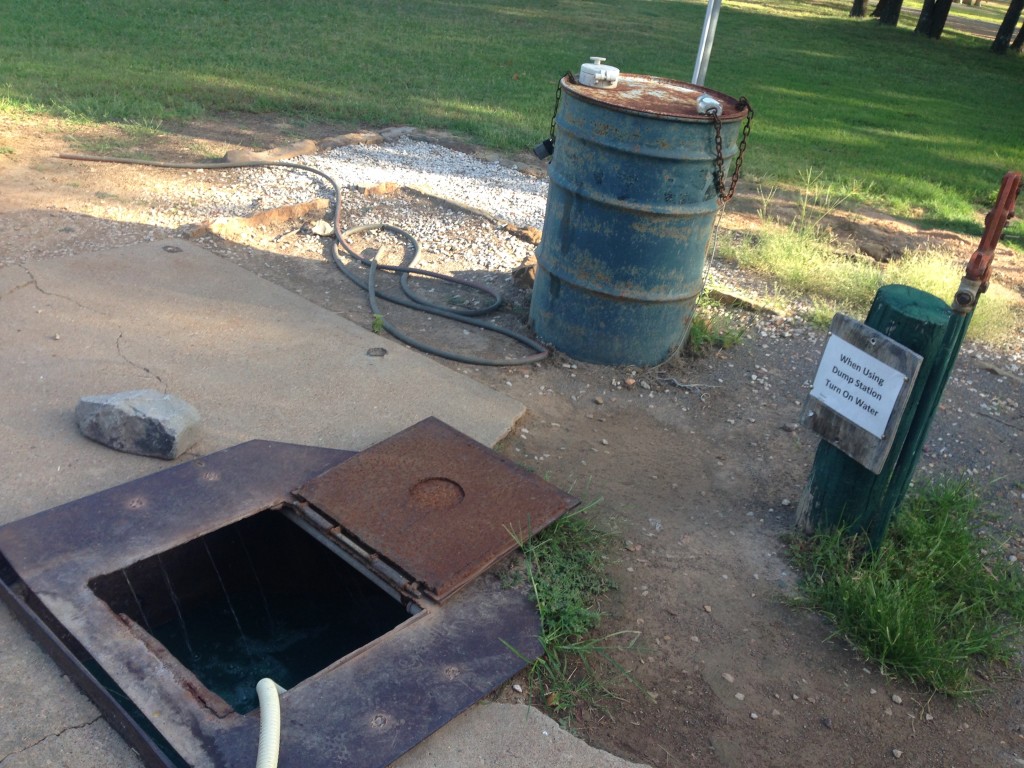 So I guess sometimes that’s how an RV dump station works, but so far only that one time.

3 thoughts on “This One is About the Septic System, In Case You Want to Skip It”