Today, a reader question! Michael asks how I get power when I’m not plugged in. 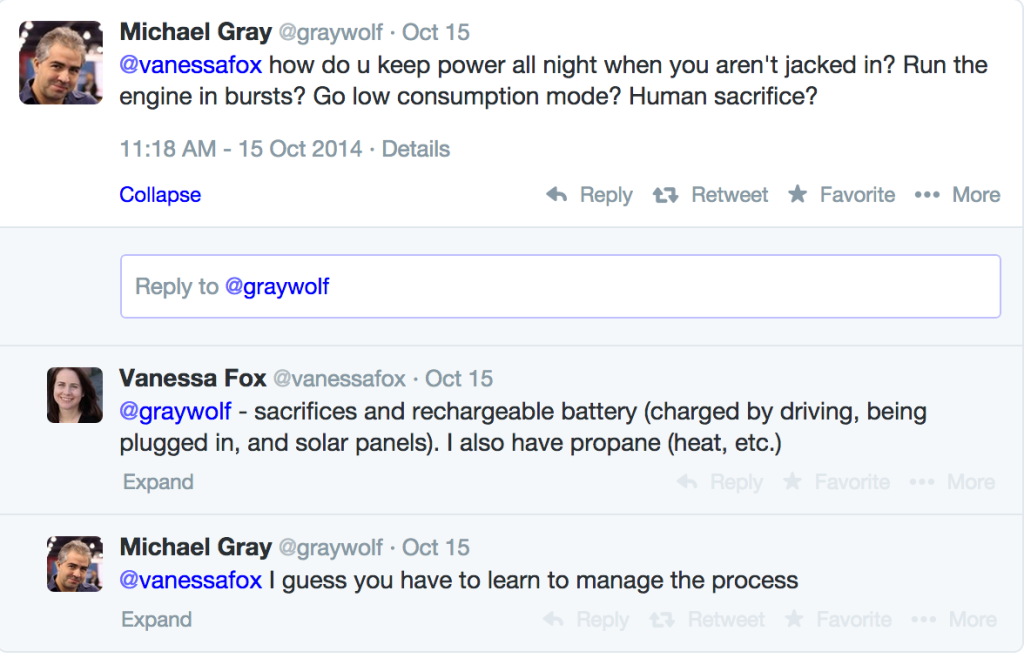 I do have to manage the process but it’s way easier than you might think. Since I have the littlest Roadtrek, I also have the least amount of power to work with. (Well, some older models may have even less — for instance, they may not have generators.) A model like the E-Trek is amazing: huge solar panels, 8 batteries, 5000 watt inverter. You basically never have to plug that thing in.

But back to my littlest Roadtrek.

My Roadtrek has two sources of power: electricity (in varying forms) and propane. Propane is the simplest. I just get the tank filled when I’m running low and it powers the furnace, stove, hot water heater, and refrigerator,which switches to propane automatically when another power source isn’t available.

The refrigerator has little status lights that tell me what type of power it’s using: 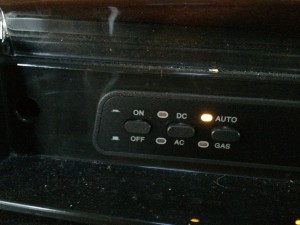 Electricity is available in several forms, which boil down to high power mode and low power mode.

In high power mode, I can run everything: air conditioner, microwave, my Nespresso machine (Mmmm, coffee….).

I’m in high power mode when I’m running the generator (which runs on gas from my fuel tank) or when I’m plugged in. My electrical system is 30 amps, so I can plug directly into a 30 amp outlet, or I can use an adapter to go plug into 50 amps (at some RV parks and campgrounds to accommodate larger RVs) or the 15 or 20 amp outlets you might have at your house.

When I’m plugged into 50 amps, I still only have 30 amps available. When I plug into 15 or 20 amps, well, I only have those 15 or 20. The outlet you plug into at a campground or RV park has a circuit breaker and you also have them inside the RV so if you overload the system, you’ll flip a breaker (or both the outside and inside breaker, like that one time I was running the air conditioner and the microwave at the same time). 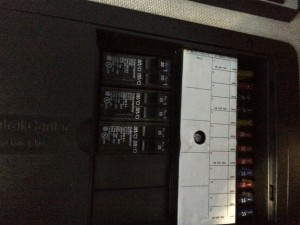 But 15 amps is plenty to run the air conditioner.

I almost never use the generator. Mostly because I don’t need to, and also, noise. There are exceptions:

No services for 100 miles? No problem. I’ll just fire up the generator and make some coffee.

To turn on the generator, I just flip the switch: 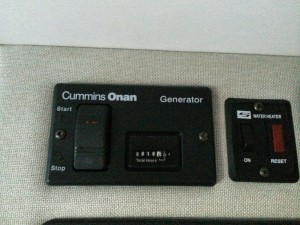 Unless I need the air conditioner because it’s thousands of degrees outside, I don’t ever really need to plug in. That is, I don’t need to plug in from a “do I have enough power to run this” perspective. If I’m staying in one place for several days, I likely will want to plug in because I’m otherwise on battery, which doesn’t last forever.

So let’s talk about the battery!

The battery is low power mode. On battery, I can’t run the microwave, the air conditioner, or my Nespresso machine. Low power mode runs off of the house battery (which is different from the engine battery). The battery charges when I’m driving, when I’m plugged into power, when I’m running the generator, and from my solar panels.

I mostly keep it charged from driving since I don’t tend to stay in one place too long. If I was out in the woods for a week, for instance, the solar panels would probably not be enough since they only charge the battery a little. In that case, I’d probably run the generator for a while to charge back up.

But if I drive a couple of hours (which I tend to do most days), the battery gets charged back up no problem.

With battery alone, I can run all the 12 volt stuff: the water pump (to flush the toilet or turn on the faucet at the sink), the roof fan, the hot water heater, the refrigerator, the interior lights, the LP gas and CO detectors).

I can also flip on the inverter (which turns battery (DC) power to AC) in order to use two of the outlets (the one for the TV/DVD player and the one above the kitchen counter).

The inverter only provides about 750 watts of power though. (Which is why the Nespresso machine, at 1500 watts, is out.) With the inverter, I can run the TV and DVD player (and hence have music through the speakers), charge my laptop and phone, and power things like my curling iron or a small fan.

But how long can I do those things? For that, we look at amp hours. How many does my battery hold and how quickly do my solar panels replenish the battery? How much power does everything take? It’s math, people. Math! No one told me there would be math.

I have one 12 volt battery, which gives me 95 amp hours. Under optimal conditions, my solar panels recharge the battery with 3.5 amp hours (and the conditions are never optimal). An overhead light is maybe 2 amps, the fan is around 4.

When I’m parked even for a couple of days, I’m probably only going to use the fan and charge up my laptop and phone. Sure, I’ll need the water pump every so often, but I’m not really using that much power. Turning something on generally takes more power than keeping it running too (I tried using a lower wattage coffee maker once and the instant I turned it on, it sucked up half my battery).

But the point is, I really don’t have to do math. If I were out in the woods for a week, maybe. Parked in a Walmart parking lot all night and then parked by the ocean all day, not really. I find that I’m not using much power and the solar panels do OK to keep the battery from dipping too low.

I can monitor everything on a handy panel. The battery status is on the far right. Right now, it’s just below fully charged. The propane, however, is almost empty (it’s the status on the far left). (The second set of lights is the fresh water tank and the third and fourth set are the black and grey water tanks, respectively.) 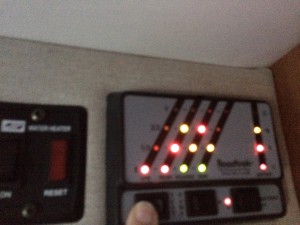 On mornings when I’m not plugged in, I generally heat water in a kettle on the stove and make coffee via Aeropress or Starbucks Via.

When I’m driving, I charge my phone, iPad, and laptop (I use an inverter I plug into the cigarette lighter).

See Michael? No sacrifices needed. And I have coffee available no matter the circumstance. And that’s really the most important thing.

9 thoughts on “But What About Power in a RoadTrek? Don’t You Run Out?”