Remember when you were 18 and you were an adult and you knew everything and all those old people (30 year olds) knew nothing? Like their minds had atrophied and they couldn’t even remember what the world was like?

That’s how you feel the first time you drive into an RV park. An RV park. Sounds sort of terrible, right? But no. It turns out that as you get older, you start to hone in on what’s really important. Like peace and quiet and views of the river, and massage therapists and dog walkers.

I was a little nervous. This was going to be my first attempt at hooking up all of the various things that need to be hooked up. And there would be people around. Experienced RV people. Who you just know would be peeking out from their 5,000 square foot class As as they typed their mocking commentary in the RV chat rooms. And uploaded photos of me unable to figure out how to plug in an electrical outlet.

Would I even find the right space to pull into? Could I back in without smashing into the RV next to me? WHY IS EVERYONE STARTING AT ME?!

I pulled into the RV park just south of Redding, CA around sunset. Two older ladies were in the office. First, the questions: did I have a dog? I must have looked confused because they quickly explained that they were just asking so they could give me dog biscuits.

One of the women motioned to the other one. “She’ll show you to your space.” I must have looked even more confused. “Valet service!” she said.

She walked out and jumped into a golf cart. “Follow me!”

I followed her past the pool and the hot tubs and the gym and the lounge chairs next to the fire pits and the spa and the media room. 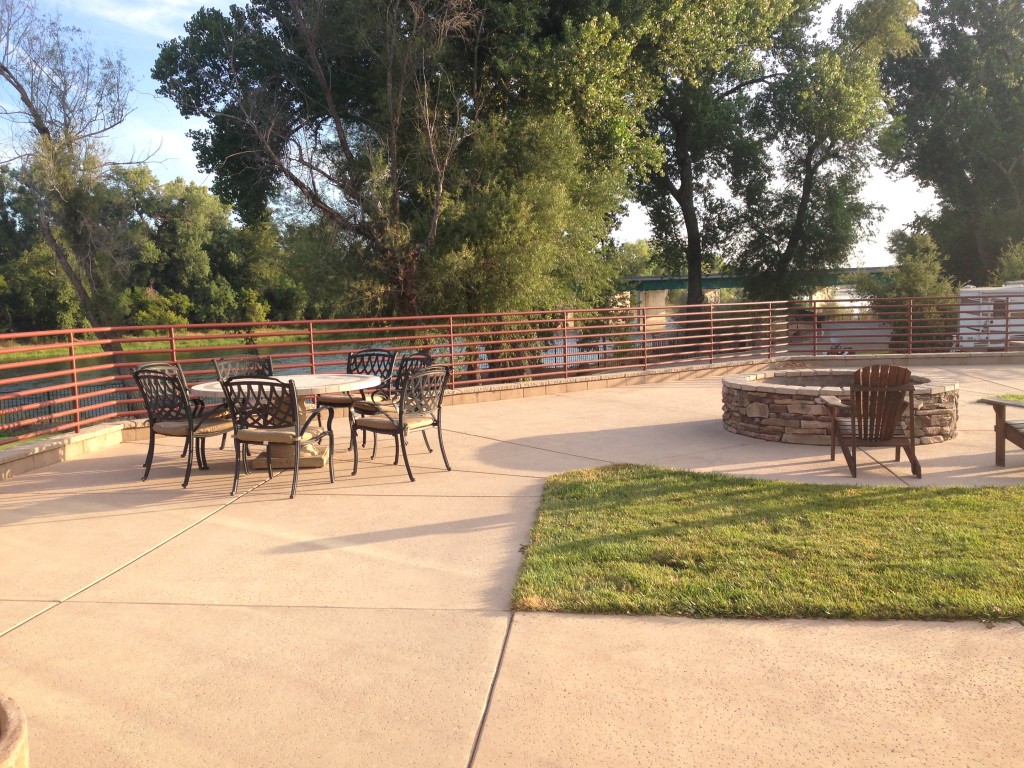 She pulled up next to my space at the edge of the river and then helped me back in like she was guiding in a plane. 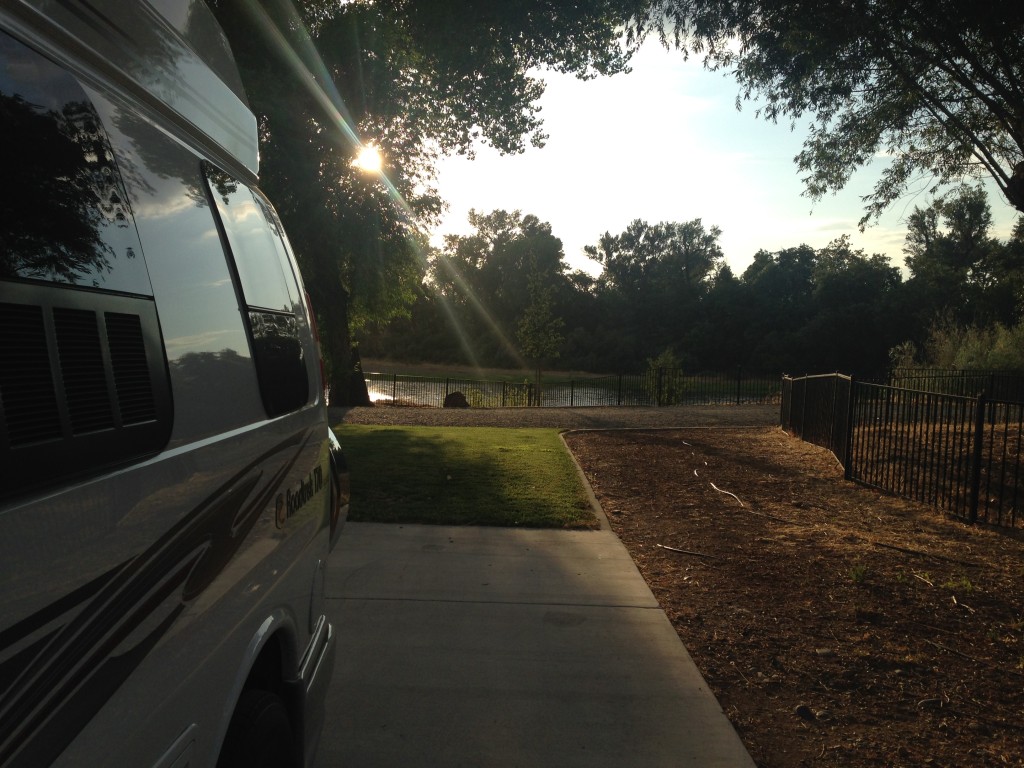 She showed me where to plug in my electrical cord and connect my water hose and screw in my cable connection and, well, connect the sewer system.

Could she tell this was my first time? Are they always this helpful?

But now, the moment of truth.

I drug my electrical cord to the utility box. And I plugged it in. I flipped the breaker on. I went back to the RV. And my power worked! I successfully plugged in a cord! I was very proud as you might imagine.

Water next. The way the water works is similar to how you would connect a regular garden hose to an outdoor faucet. Similar in that it’s exactly the same.

The technician who had done the walkthrough of the RV dealership had made a big deal about this little black lever at the water connection. You see, OFF is when it’s vertical. If you want water to flow into your RV, you have to turn the lever ON. And you do that by flipping it horizontal. He said I could remember this because the pipe is also horizontal. If I want water to flow through the pipe, the switch has to point in the same direction as the pipe. SUPER EASY!

I connected the hose. I turned on the water outside. I flipped the little black level horizontal. I went inside and turned on the sink. Water! Success! You can imagine how proud I was now. I have won RV hookups!

Only then I went outside again. And noticed water gushing out of my drive side door. Which didn’t seem quite correct. I had created a waterfall from my RV that cascaded all the way down to the river. And California is in a drought. Surely the water police would come surround me any minute. Not to mention all those RVers taking pictures of me with their cell phones and uploading them to those RV chat rooms.

I rushed to turn off the water. Then I slowly opened the driver side door. You see, you fill up the water tank much in the same way you’d fill up your gas tank. And the fill up spot is at the drive side door. The cap to the water tank had been blown off (fortunately, it was still there) and water was pouring out. Huh.

The internet, fortunately, knows everything. That black lever? It is supposed to be vertical if you want “city water” (as the RV folks call it) connected to your RV. You move it horizontal when you want to fill up your water tank.

And so began the many moments in which I learned that nearly every bit of the very little I had learned at the dealership was utterly wrong. Opposite even. Every journey begins with a single step. And my first step was a cascade of water.

I got the water situation worked out and then I ran my air conditioner for the first time. Which, I have to admit, was pretty awesome.

And then I sat outside and did some email. (Yep, RV parks have free wifi too.) 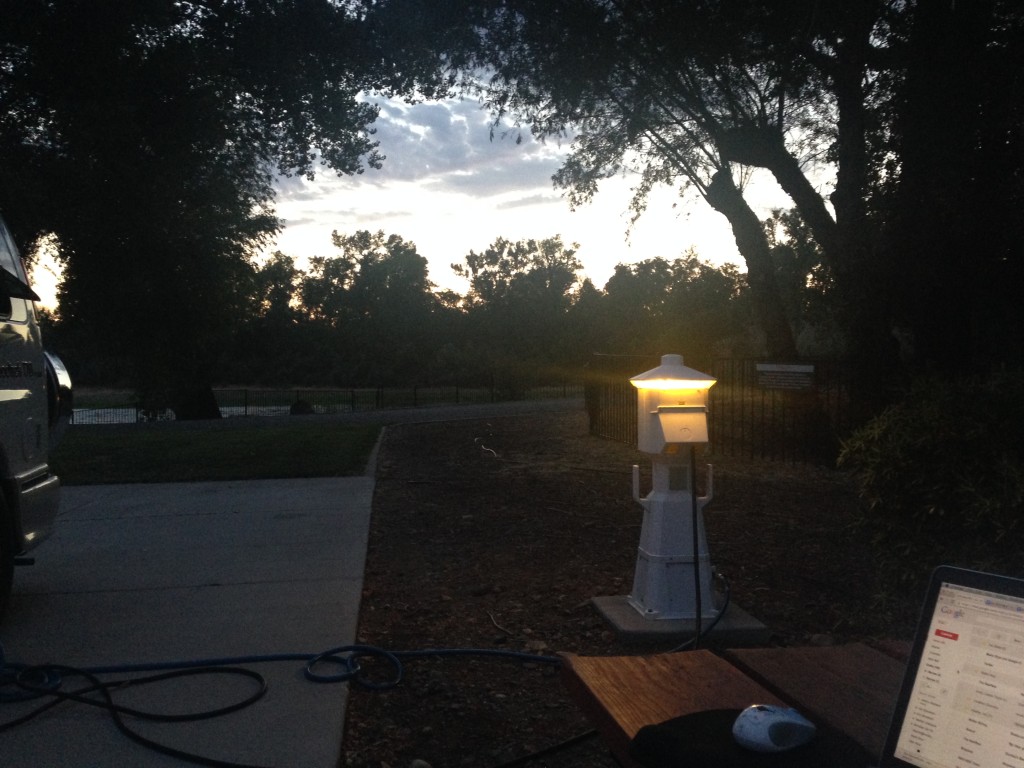