I veered east and headed towards Stillwater.

I never lived in Stillwater.

When I was in high school in northeastern Oklahoma, Stillwater was the hip town where you always wished you were. Texas has Austin. Louisiana has New Orleans. Oklahoma has Stillwater.

I went to an Oklahoma high school in the mid-80s, when everything that mattered was football (and sometimes wrestling).

1988 was my junior year and every other day brought another college solicitation in the mailbox. OU and OSU both sent football tickets.

Barry Sanders was at OSU. Barry Switzer was coaching OU. We were hearing rumors of a scandal, but Switzer was still revered. The full story and resignation would come later.

Even then, I don’t know that many Oklahomans understood what Switzer was resigning over, other than the stress from all the pressure from the NCAA. Special favors for high school players as part of recruitment efforts? Why wouldn’t OU do everything they could to convince the best players to come play for them?

Turning a blind eye when college players dealt drugs or shot each other or (even, horribly) gang raped a woman? The high school and college football system was practically designed around turning a blind eye from what I could see of Oklahoma sports. Anything to win. Get the best players and make sure they can play.

My sophomore year of high school, my boyfriend was a senior and an all-star wrestler. The coach needed him on the team and needed him to win (looking back, this was likely to preserve the coach’s winning record). My boyfriend couldn’t do homework because he had to be at practice. The teachers knew that as a wrestler who won matches, he couldn’t be on academic probation so they passed him.

I’m sure everyone had the best of intentions. School pride, hometown pride, and a certainty that a wrestling scholarship was the only way these high school kids would get into college. (My boyfriend did get an athletic scholarship. Which he lost when he never went to class, having had no experience being required to go to class, and failed his classes.)

Anyway, the point is that Stillwater was hallowed ground. I figured my college choices were OU and OSU. OU was in Norman, just outside of Oklahoma City, home of dust. Stillwater was home of Eskimo Joe’s. OSU was definitely the frontrunner.

I took my friend Nancy with me to both football games (she was older than me and had a car). It was an amazing blur of beer in red plastic cups on fraternity house lawns, Bobby Brown blasting from the stereo, and Barry Sanders spinning away from the defense.

Of course, I moved away from Oklahoma my senior year of high school, and my perception of the college options available to me shifted.

Now, after veering east, I was back.

The first thing I saw was the conglomerate of Barry Sanders car dealerships. 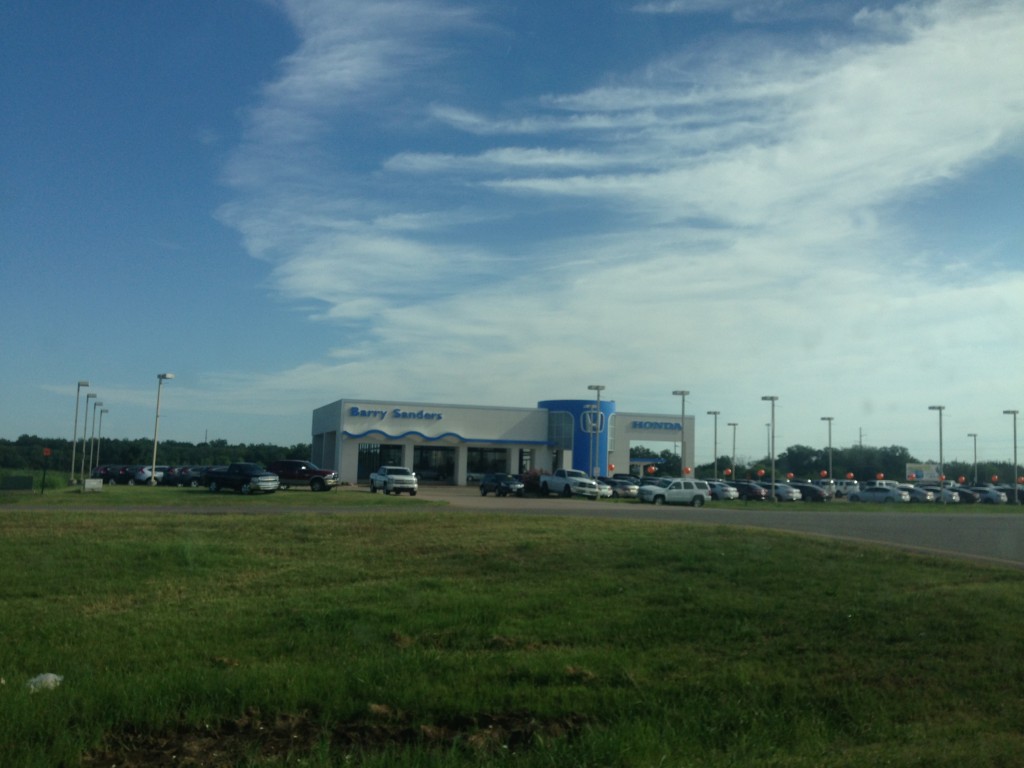 Everything old is new again.

Since Stillwater is a college town, coffee and wifi aren’t hard to find. I camped out at Aspen Coffee Company.

I stayed at a nearby lake, bunnies and deer everywhere.

To overgeneralize, different types of campgrounds tend to have different crowds. Upscale RV parks tend to be an older crowd, with $350k+ class As. State campgrounds skew younger: parents with young kids. And national parks are full of international travelers who fly into the United States, rent an RV, and set out to see America.

Oklahoma lakes are full of pipeliners. Pipeliners work on oil or natural gas pipelines. Their offices are wherever the pipes are, and this changes every 4-6 months. Some people (mostly men) who do this work have a home base where the family lives and are away from home for weeks or months at a time. Others pack up the whole family in an RV and live wherever the job is. (We tried both ways, plus lots of other variations, when I was growing up.)

In Stillwater, the guy working the campground put me with the pipeliners. They’re mostly at work and even when they’re not, things are pretty quiet (unlike the section of the campground full of guys there to fish and party for the weekend).

I talked to my neighbor, originally from eastern Arkansas (with a cajun accent so thick, I could barely understand him). He was there with his “boys”, each with their own RV, all in a row.  (Pipeliners often are freelance and work in teams; my stepdad had a “helper” – usually a young kid who worked as a kind of apprentice.)

My neighbor said they’d been there 7 months so far. He took a swig of the Busch beer in his hand. The air was hot and sticky and full of mosquitoes.

Apparently he’d noticed me earlier, working outside on my picnic table. One of his “boys” had come over to say hi and they were talking about me later. And so then he felt like a jerk for not coming over to say hi too. (I’m often the talk of the RV park, simply by nature of being a woman by myself in an RV model not generally seen.)

He told me his daughter was in college and he’d told her that he’d pay her way. Only now she was working on her third degree, and he hadn’t realized he’d signed on for that. She had moved to California (“why would anyone want to move to California?!!” he said).

He regaled me with tales of his speedboat and trucks back home until I had to escape the heat and head into the air conditioning. Although I bet I could have finagled a beer with him and his boys had I  been able to hold out against the humidity a bit longer.