Tulsa is only 70 miles from Stillwater.

But 70 miles is a long way to go without libraries, coffee shops, cafes, wifi, or even just a quiet place to sit and work. Sure, a high school kid could make the drive. It might be inconvenient, but it would be doable. After all, when we lived in Jennings, we made the weekly grocery trek to Tulsa. But not every high schooler has a car, or one that is reliable enough to drive out of town, or gas money.

Anyway, by the time I got to Tulsa, I was ready for some wifi. And some vegetables.

I never lived in Tulsa, although I lived in Broken Arrow, a kind of suburb, when I was in first grade. When I think of Tulsa, I think of this huge city. My first real concert was at the Mabee Center in Tulsa when I was in third grade (Amy Grant). When I was in high school in Tahlequah (70 miles east), one of my more thrilling moments was going to a club in Tulsa with my Kentucky Fried Chicken coworkers and a fake ID.

Tulsa has around 400,000 people so it’s not a small town, but it’s maybe not the booming metropolis of my youthful perception. Downtown is almost quaint, and I was super excited to find my pick of coffee shops, hotel lobbies, and restaurants.

But then here’s what happened.

The thing is that when I was growing up — when I lived in Oklahoma — I was super blonde. Not highlighted blonde, but actual blonde. Like here’s me at my 8th grade graduation and yes, I actually am wearing lace fingerless gloves and shut up because that was 1986 and Madonna had made lace gloves very hip. Like you have no idea how hip. I WAS HIP DAMMIT YOU DON’T EVEN KNOW. 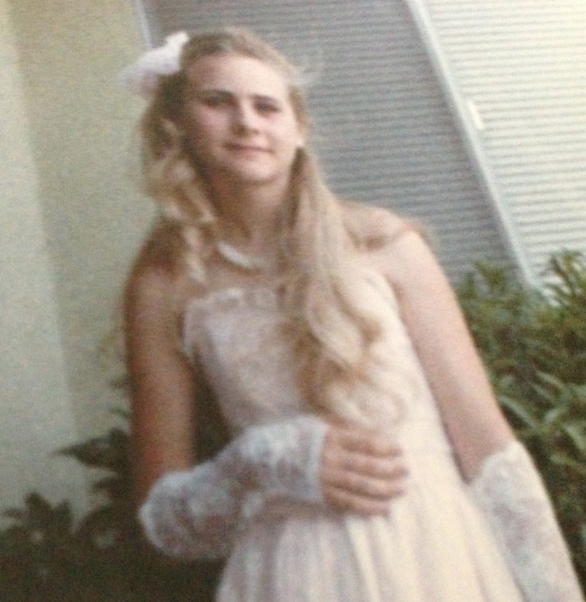 About seven years ago, I decided to go dark. I was basically entirely gray by then anyway. It seemed like a fun change and I wondered if having dark hair might cause people to take me more seriously professionally. It did. But I’m 42 now. Surely I don’t need dark hair to function in the professional world. So I decided to lighten up a bit.

Before I left Seattle, I went somewhat lighter, although no where near back to my 8th grade graduation color. Once I got to Tulsa, that had been a while, and the grey coming back was really bugging me. So I decided to get a touch up. A touch up.

Unrelated aside: I always remember my grandparents’ furniture as being covered with sheets (exhibit A: photo avove). Do you think that was because they had so many tiny-size grandchildren running around (including having my sister and me living with them for a while when my mom moved back home)? Because at the time, I just thought it was weird. Now I’m thinking it was pretty smart.

Anyway, back in present day, the hairdresser saw the look on my face. “Too blonde?”

She toned it down. It’s still about 8th grade graduation color.

Related aside: I was wrong when I thought being 42 would mean that I could be taken seriously as a blonde. The comments (that I rarely heard with dark hair but always heard as a blonde) have come back with a vengeance.

So now here I am, about to head to the town where I went to high school. About to walk through places I haven’t seen in twenty-five years, back when everything was new: my first kiss, first job, first idea of what it might mean to be an adult. With the same super blonde hair. Oklahoma has magic powers and is secretly grasping at me and pulling me back to 1988.