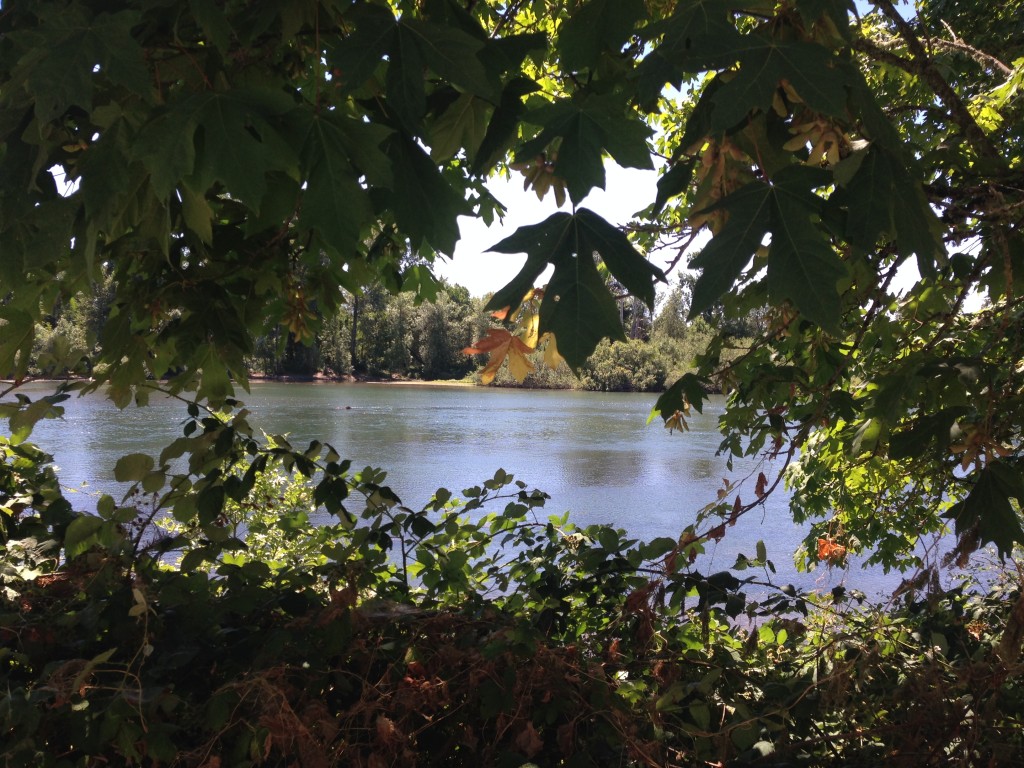 I slept in a mall parking lot last night. Wait, that doesn’t sound quite right. I parked my van by the river and … Right, I guess that sounds even worse.

I spent my first night on the road in the best boondocking parking lot in America.

I sort of sound like I’m some kind of RV hipster, with secret knowledge of hidden places and insider slang, right? But actually, I didn’t even know what boondocking (aka free camping, almost certainly involving “dry camping”, aka at a site with no hookups) was a few weeks ago.

But when I read that someone called this their “fave urban dry camping site” and someone else said it  was “one of the nicest “freebie” overnight parking spots we’ve ever encountered” and I saw I’d be driving right by it, I figured I’d better check it out.

I know. It seems a little sketchy. Or maybe dangerous. I’m a single woman alone in a van in the middle of the night. By the woods. And a pond that, while small, is surely large enough to sink a body in.

Also I’d never spent the night in the RV before. Maybe it would be scary and loud and confusing and snakes would eat me. Or maybe bears would get in. And eat me.

I realized I hadn’t really thought this whole RV thing through. One day, I just had this epiphany that I should buy an RV and drive around. And so I bought one. And now I’m driving around.

The Drive From the Dealership

I had the same thought a few days ago as I drove the RV home from the dealership. I have a Roadtrek 170 Popular. Which is regular van length (18′ 9″), but a little taller (8′ 9″). It’s also a lot heavier. I guess carrying a whole house with a water tank and granite countertops and a generator and the kitchen sink (literally) can add a little weight to a vehicle.

As I pulled out of the dealership and onto the road, I wondered if perhaps I should have researched this whole RV idea a little more.

From the moment I had this idea, I thought it would be awesome. Like seriously and totally awesome. But I also wondered if maybe I was wrong. That I’d get out on the road and immediately realize I’d made a terrible, terrible mistake.

I made my friend Michelle do a test run with me after I’d loaded up all my stuff. I picked her because she didn’t think this whole RV thing made me a crazy person. Which is a plus when you need a companion for the test of a crazy thing you’ve decided to do.

We drove down the freeway for a few miles and didn’t die so we called it good.

The Drive From Seattle

Michelle was moving to Portland the next day, so we packed up some of her things in my aisle and caravanned down. I made her watch to see if I stayed in my lane or if I somehow gave it away that I was a novice RVer that everyone driving down the road would laugh at.

After a couple of hours, driving the Roadtrek seemed almost like normal driving. Sure, I couldn’t drive into parking garages and I was astounded at the little cars that would cut me off and then brake as though I wasn’t driving an entire house behind them. Also, I wasn’t super fond of random wind gusts. But otherwise, I felt pretty confident. I COULD BE A TRUCK DRIVER NOW IF I NEED A NEW CAREER!

I slept on Michelle’s couch for a couple of nights and I even had my own pillows and blankets that I bring with me everywhere now. (Driving around with your entire house does take some mental adjustment. I’ll be in a coffee shop and get a little chilly and think, did I bring a sweater with me? Oh right. I brought all my sweaters with me.)

And then I was off to the best parking lot in America.

The Best Parking Lot in America

I drove towards the far right corner of the lot where I saw another RV parked. In less than a minute, two security guards had driven over. Did my vehicle have a bed? A bathroom? “This isn’t a Wal-Mart parking lot! We have standards. Haha!” I passed the quiz so they gave me a little registration to fill out and got my cell phone number. They told me that they patrolled the parking lot every 15 minutes and they dimmed the lights at night to help everyone sleep.

They said I might want to check out the “hippie” festival across the bridge.

This might be my favorite overnight spot. I know it’s my first spot. But it might be hard to top this.

I parked in the corner so I had the river on one side and a meadow on the other. 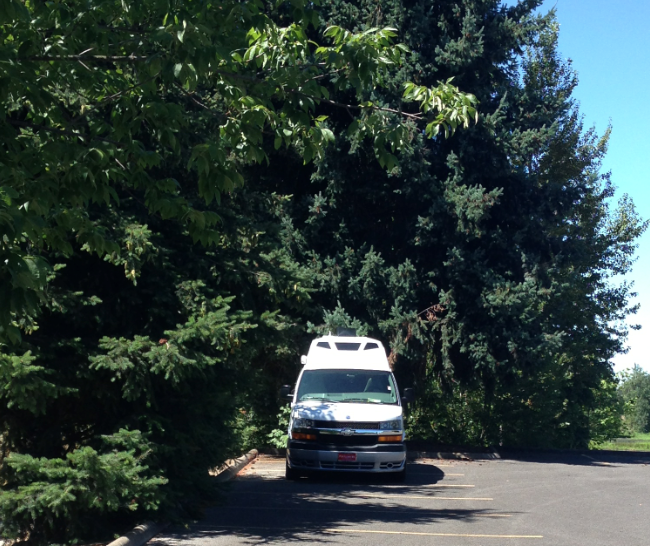 I strolled down the jogging trail, across the bridge towards the hippie festival. They weren’t kidding. Oregon hemp fest. A hip hop band was on stage rapping “we smoke to hemp hop”. Seriously, I am 99% sure that was the lyric. Would I have ever known such a thing existed had I not set out for places uncharted? OK, probably yes since I live in Seattle.

I walked down to the lake and watched the ducks and then over to a marshy part of the river with herons and cranes and as it turns out, beavers. I watched one just knock a duck right off a log.

An extremely cute guy without a shirt on came jogging by (it was about 500 degrees outside). He stopped to watch the beaver and chat a bit. Best parking lot in America.

I couldn’t really go hang out in the RV. Since it was 500 degrees outside, it was maybe a million or so inside the RV. (I don’t have a way to measure the temperature, so I’m just estimating.) I do have an air conditioner but since I was running on battery, I’d need to fire up the generator. It was my first day out so I wasn’t really ready for that level of expertise. I wasn’t sure if running a loud generator was cool in parking lots or if I’d make everyone mad and get ostracized by the RV community and then I’d never get invited to RV prom.

So I wandered into the mall. Being a mall, half the stores had closed down and those now empty areas had been turned into lounge spots with tables and comfy chairs. Also, the mall had free internet. And great air conditioning. So I got a little work done while I sipped on my iced latte in the cool air. That’s how we rough it in RV life.

Turns out that my first night in the RV I did not get eaten by a bear. Or snakes. The evening cooled down. It was quiet and peaceful. In the morning, I heated some water on the stove, made coffee with Starbucks Via, and sat outside and watched the water. 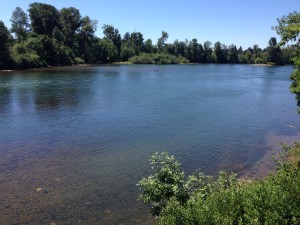 And then I said goodbye to the best parking lot in America and drove south.

11 replies on “And Then I Started Driving”

Love your writing!! I am laughing and nodding my head as I read. Heard you on the road trek podcast and am now a follower. I just bought a class b and although not full time and exploring the country as often as possible. Thanks for sharing your adventures.

Thanks! Enjoy your class B!

We live in Salem, OR and have recently moved here after having in the greater Seattle area (Eastside) for right around 45 years. We also recently purchased our first RV followed shortly after with the purchase of our second RV.

We have overnighted in Wal-Mart parking lots and a couple of Cabelas. What has really gotten us excited is knowing that somewhere near to us in Oregon is “The Best Parking Lot in America”. Please give us a hint so we too may experience it perfectness.
Thank you. Your writing is delicious. We are now going to become what you may refer (I said refer:)) to as “regular readers” and at our age regularity is a topic of discussion daily.

Love your writing! And your creative independence.

I also know that perfect parking lot! I live here, and that same spot is where we get out of the river after floating downstream from the next town eastward. So glad you had the chance to dream here. Come back next summer with an inner tube!

I loved (loved!!!) my 1998 Roadtrek 170. Went everywhere in my moveable house. Reluctantly gave it up when life said to go a different way. Now, after a few years of Roadtreklessness, I’m so ready for another one. If you come across a really nice 170 in the sweet spot of design years (you know, with the classic kitchen but newer sewer system design), please post about it and I’ll zoom over to claim it. Thanks.

Doing what you’re doing is my dream, I want to buy an RV, then I want to travel everywhere in Poland, and many other parts of Europe, then all over the UK where I was born. Your interest in travelling via an RV is a huge inspiration to my girlfriend as she feels travelling in RV is only something for men, and that woman would be afraid to do such a thing, seeing you do it alone has proven her wrong. Keep up the good work 🙂

Glad I found you…you’re living my dream and I love your writing style. I need to catch up and read your previous posts. I bought a used BT Cruiser B+ RV in September and my sister and I (both retired) set out. What I didn’t understand was that we had different visions. She saw the RV as a vacation tool for periodic trips close to home while I envisioned living in it for months at a time. After a month together, I put the RV up for sale at a consignment dealer where I’m waiting for it to sell. I haven’t given up on my dream, I’ve just altered it based on what I’ve learned. As soon as my RV sells, I’m going to buy a Roadtrek 170. It’s a better size for me as a single person. I found out I don’t need an oven. We barely used our stove. I don’t need a big refrigerator. It was mostly full of drinks. I don’t want multiple beds…it encouraged people to show up who wanted to ‘camp’ with us in the RV. I will however miss my little bathroom but I can still handle essentials in the Roadtrek.

Just fyi…. the Valley River Center, unfortunately, doesn’t allow schoolies or conversions. I was accosted before I left my front door, upon arrival, and was told I wasn’t allowed to stay the night. I politely told him I was simply shopping, but thanks for the selective discrimination.

Yeah, they came up to me and verified I had a bathroom and then gave me a slip I had to put on my dashboard.

Are you still here ?
Where do you currently write ?
I want to follow you. Are you on Facebook ?