Mastodon If I Believed In Puns, I'd Write Something Clever About the Badlands Here - Girl Meets Road Skip to the content

I know. You think my life is all miracles of nature and a life fully lived and exhilarating freedom and adventure. Majestic vistas, interesting strangers, the glory of sentence fragments.

But also no. Sometimes it’s not any of those things at all.

I’d been wanting to check out dispersed camping: that is, driving up to the beauty and isolation of public lands and staying as long as one likes. Lots of national forests have free camping at what they call “primitive” sites, which are designated RV sites but with no hookups. Dispersed camping is a step beyond. You just drive out onto public lands and stop anywhere.

I drove out to the Fort Pierre National Grasslands in South Dakota, admired the beauty and splendor, etc., and drove down a dirt road that ended with grasslands, a no hunting sign, and a group of white-tailed deer. 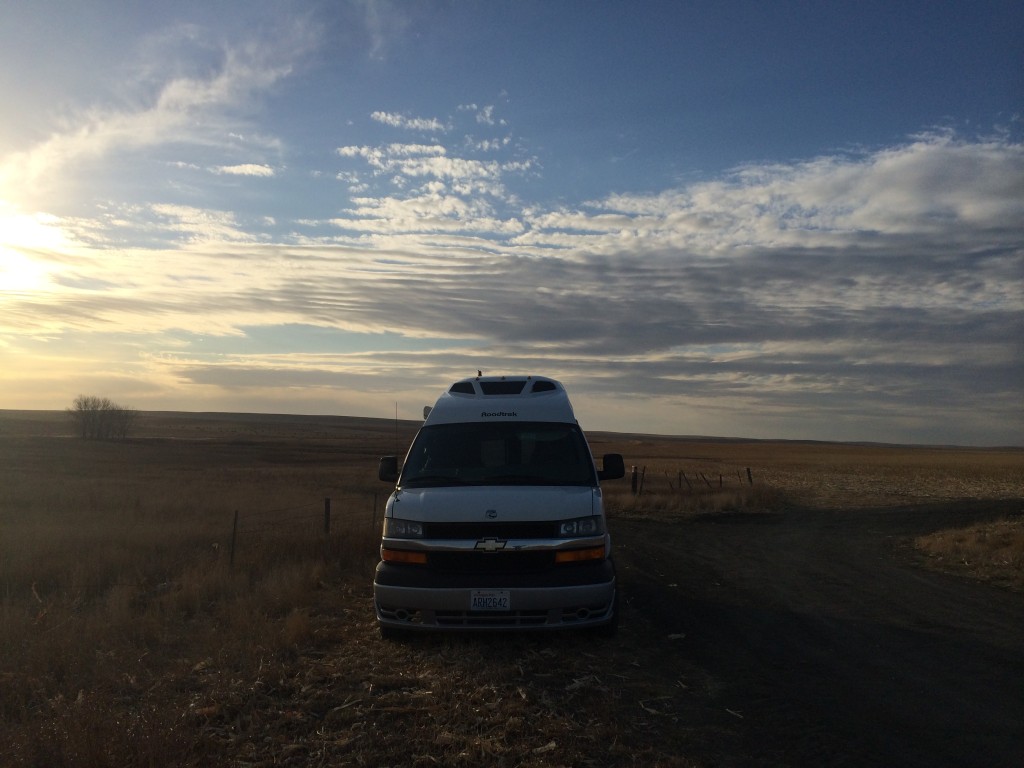 I had been driving away from the malevolent cold, and it was a fantastical 68 degrees. I had full bars of 4G. The sun was setting. Life is wonderful. 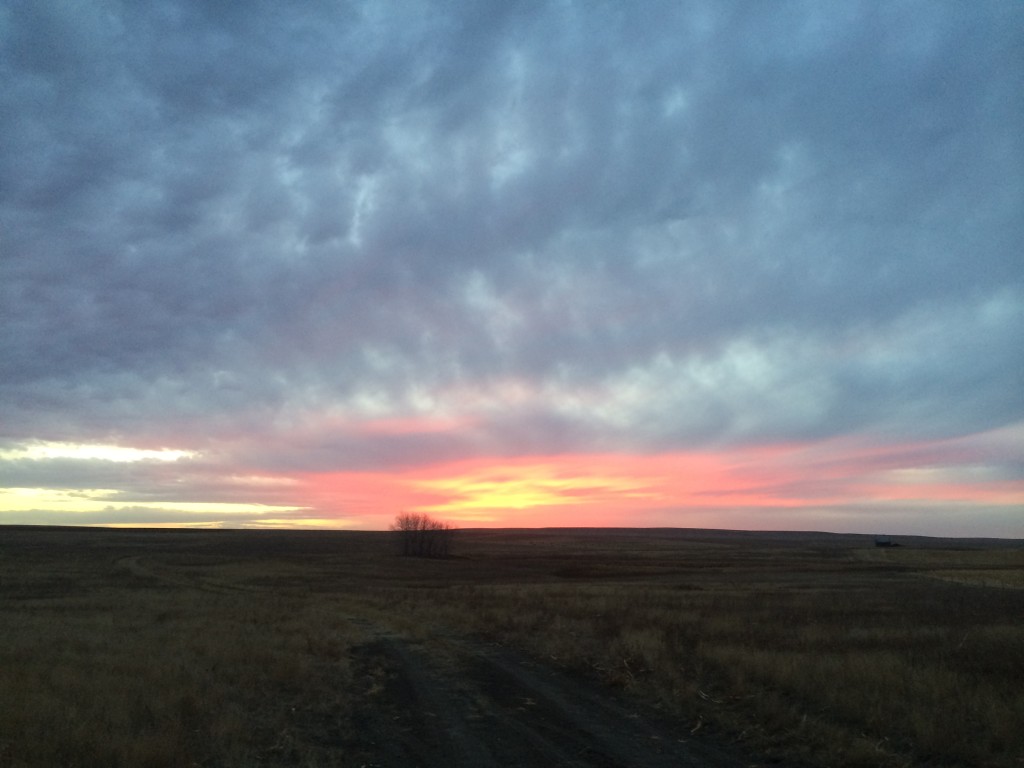 I checked the weather and saw that the cold had decided to chase me down and temps were going to plunge overnight. I figured I should turn on the propane so the furnace would be ready when I needed it. I walked outside, scaring the deer who adorably bounded away, and turned on the propane. I heard a faint hiss. And the vague smell of propane. Wait, is that right? I turned off the valve and the hiss continued. For about ten minutes.

Dear readers, truth is hazy and shifting and ethereal but one truth never changes: it’s difficult to enjoy nature when mixed with terror of a propane explosion.

I asked the ever-reliable Roadtrek Facebook group what they thought. They did not think much that was good. I called a nearby RV repair place. The guy I talked to said it was probably a leak but it should be fine if I just left the propane off. I could have it looked at in the morning.

It’s not as easy as you might think to have a restful night’s sleep with the looming threat of explosion and/or slow poisonous death.

I thought I might make the evening more peaceful by removing the skylight covers so I could enjoy the night sky (mostly void, partially stars). A couple of days earlier, I had been driving down the highway and heard what sounded like a great shattering above my head. Which is weird, right? I pulled over at the first exit and checked everything. Nothing was out of place. Nothing was broken. So who knows, I drove on.

Only now I removed one of the skylight covers and found this: 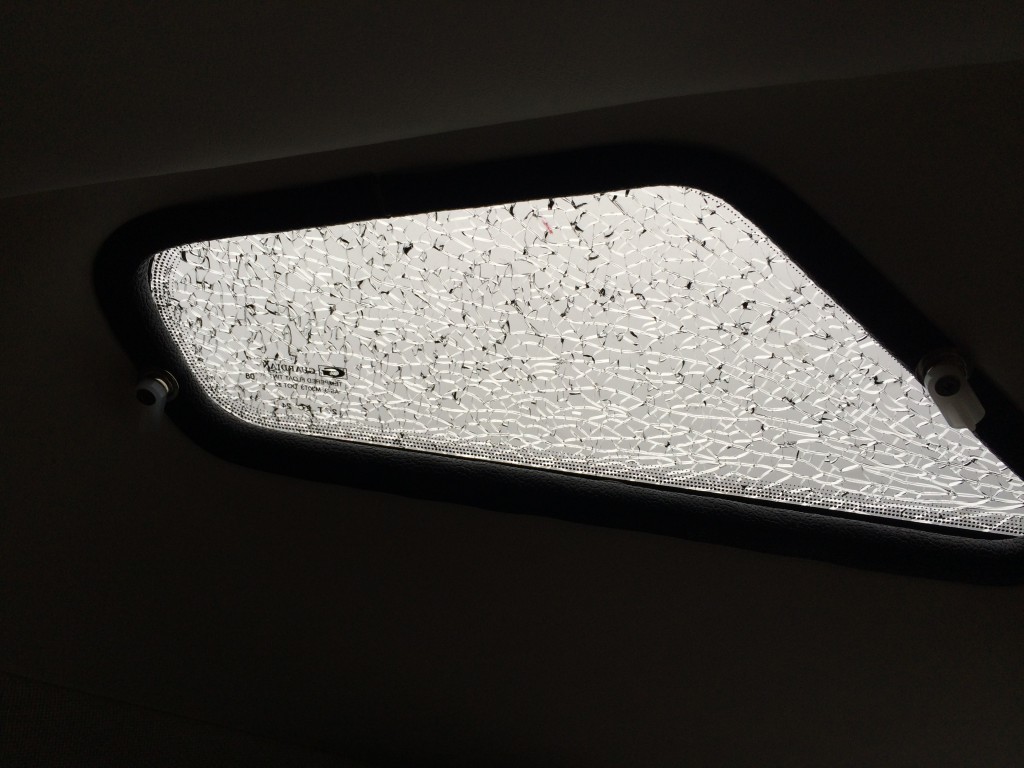 Well at least the loud shattering sound made sense now.

The next morning, I drove to an RV repair shop in Rapid City. And here’s where I start making snap judgments based on little information and skewed experience. Because I’m sure Rapid City is a lovely city with lovely people if I just get to know it, but Rapid City did not endear itself to me.

The guy at the repair place said he couldn’t fix either problem and gave me the addresses of two places that could. He said the propane leak was in fact a leak, but had to be taken care of by a propane dealer and the place he was sending me to would fix it for sure. He said he was also sending me to a glass place that would appear to me as though it dealt with residential glass, but that actually was great with all kinds of crazy sizes of windows on RVs and he sent people there all the time and they were the best. They’d have me fixed up in no time.

Well, sounds good so far. What a wonderful day!

“Wait, who sent you here?” Said the propane guy, hostile and aggressive, clearly irritated that someone was interrupting his day. “I don’t have anyone here to work on that.” Well, OK then. I asked if he had any recommendations. He called a guy. The guy declined to help. Propane guy number one I guess assumed I could hear the voice on the other end of the phone because he didn’t relay this information. He just looked at me with the kind of stare that means “why are you still here?” or maybe “how did I get saddled with this lady’s problems?”

Onward to get the glass fixed. Maybe the propane guy called ahead because the glass guy was in solidarity. “We don’t work on RVs.” I tried to explain that I didn’t actually seek him out to cast evil into his life, but just that the RV repair place had sent me over. He said maybe someone could put repair tape on it only everyone was at lunch until 1 (it was 12:50), so…

I was in the middle of asking if someone would be available at 1 to do that if I waited when he got a call. Without a word, he started talking on the phone as though my mouth were not open in mid sentence. I waited a few minutes until it was pretty clear he was going to stay on the phone until I left.

Dejected, I trudged on. I called another propane place, a bit down the road. They tried to patiently explain that I had an RV. I needed to call an RV repair place to get my RV repaired. They gave me a number. I called the RV place. They patiently explained that I had a propane issue and needed to call a propane place to get it fixed. I tried explaining the infinite loop I had found myself caught up in. The person on the phone seemed sympathetic, but ultimately unhelpful.

I drove on, fueled by a new goal: to get out of Rapid City. I really needed to get some work done and my whole morning was taken up in futile wandering so I figured I’d drive on a bit, find a place to work and once I was caught up, evaluate my best next step.

I spent the next five hours driving down a lonely road with no cell signal and no towns. After a couple of hours, I stopped worrying so much about the impossibility of getting work done and started worrying I would run out of gas. I finally followed a sign to a gas station at some point off the endless road, so at least I was able to continue on.

The point I’m trying to make here is that I left the infinite loop of Rapid City only to end up in the hundreds of endless miles of no propane repair, no cell service, and no handy public libraries. So I kept driving.

(If you wondered why I was late in returning that email, well, there was the infinite loop and also the endless road. I have wifi now. So expect to hear from me soon.) 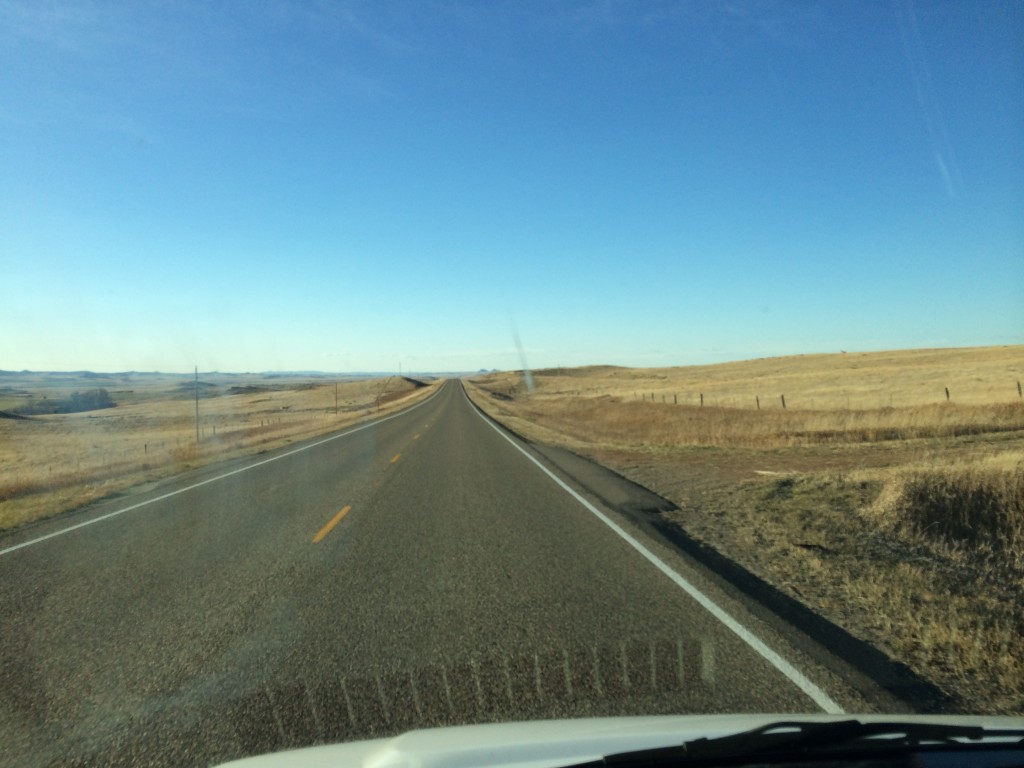 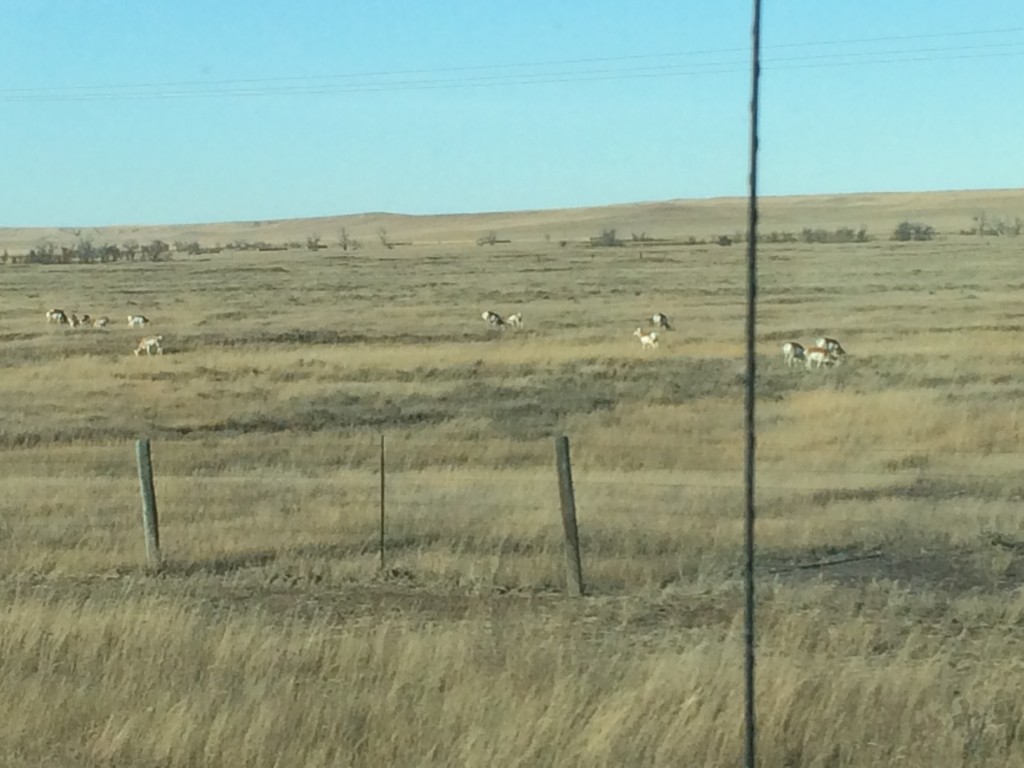 I finally made it, in the dark and cold, to a truck stop. And discovered that my down comforter keeps me surprisingly warm on cold nights.

Before all of the infinite and endless, I drove through the Badlands, where I saw lots of prairie dogs and whatever these guys are: 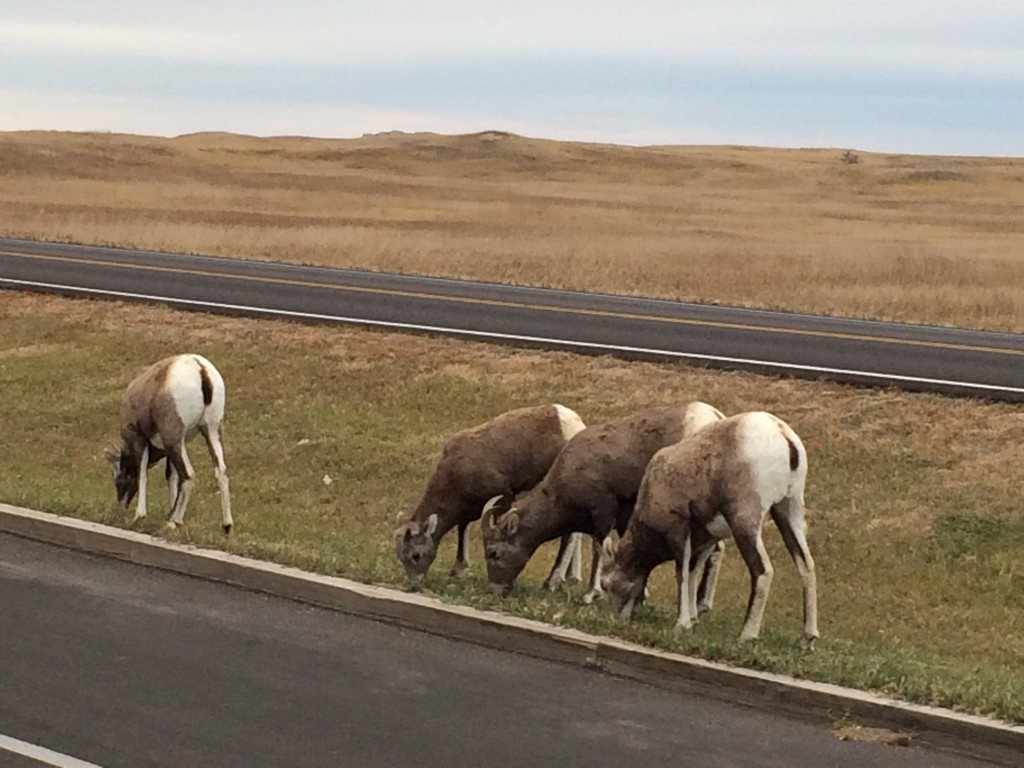 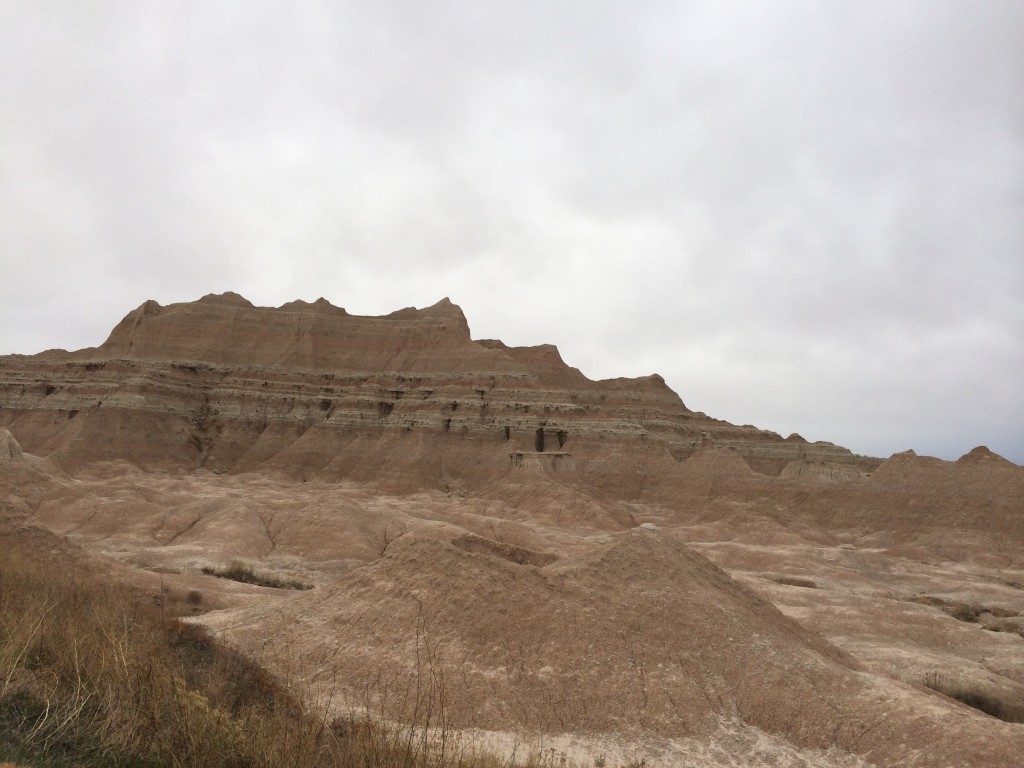 The thing about working while living on the road is that you still have to do the actual work. You can’t just flit from propane dealer to RV shop to National Park no matter how attractive that proposition might sound.

Which brings me to Bozeman, Montana. Or, that’s what brought me here I mean. I found this little resort in the middle of nowhere with great wifi, lots of comfortable rooms for working from, a fireplace in my room, and — get this — a soaking tub. I immediately booked a second night. I’m the only guest here. I got here in the middle of the afternoon, starving, and they made me soup and salad and hot tea.

Sure, that whole propane and glass situation still needs to be worked out, but for now, I’m going to take a bath and enjoy the view from my window. 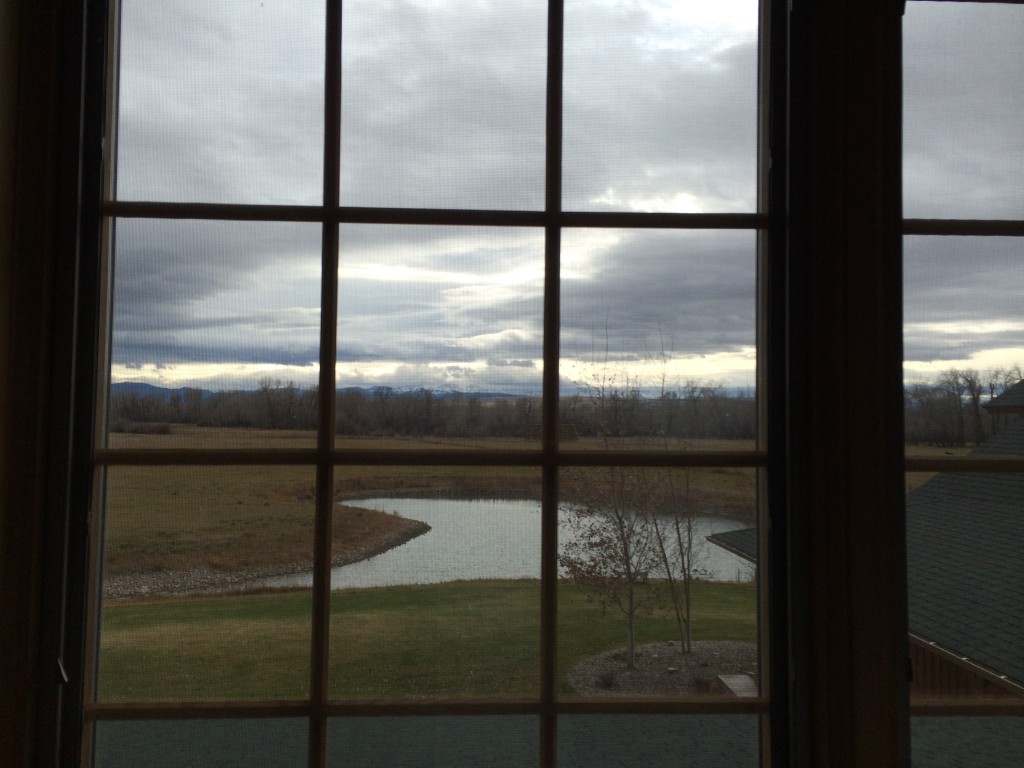 5 replies on “If I Believed In Puns, I’d Write Something Clever About the Badlands Here”

Really? I thought sheep were fuzzy like wool sweaters??

Hah, different kind of sheep. But both taste great when prepared correctly

Stumbled upon you, your writings are good and funny. I’m sorry about ur luck in “crapid” city, you should of came to Sioux Falls, we would have knocked ur socks off with friendliness, kindness, cool happenings and kick ass coffee shops and even better bars

Thank you! And good to know about Sioux Falls! I’ll definitely have to swing by there next time I’m in the area.