In Kansas City, Missouri, I slept in a real bed with a real bathroom in a fancy hotel! I know. Crazy. I was there to give a workshop at the Kauffman Center for the Knight Foundation. Also, we got to watch a drone fly around.

I hung out at the hotel’s roof deck and pool, which I highly recommend next time you’re in Kansas City.

Have you ever wanted rock star valet parking, normally reserved for really hot looking cars like Lamborghinis or Bentleys or for people with an extra $20? Do I have the solution for you! Just drive up in an RV!

Normally, valeted cars are housed in a parking garage, but my Roadtrek is too tall for that, so it stayed right in front of the fancy hotel my entire stay. 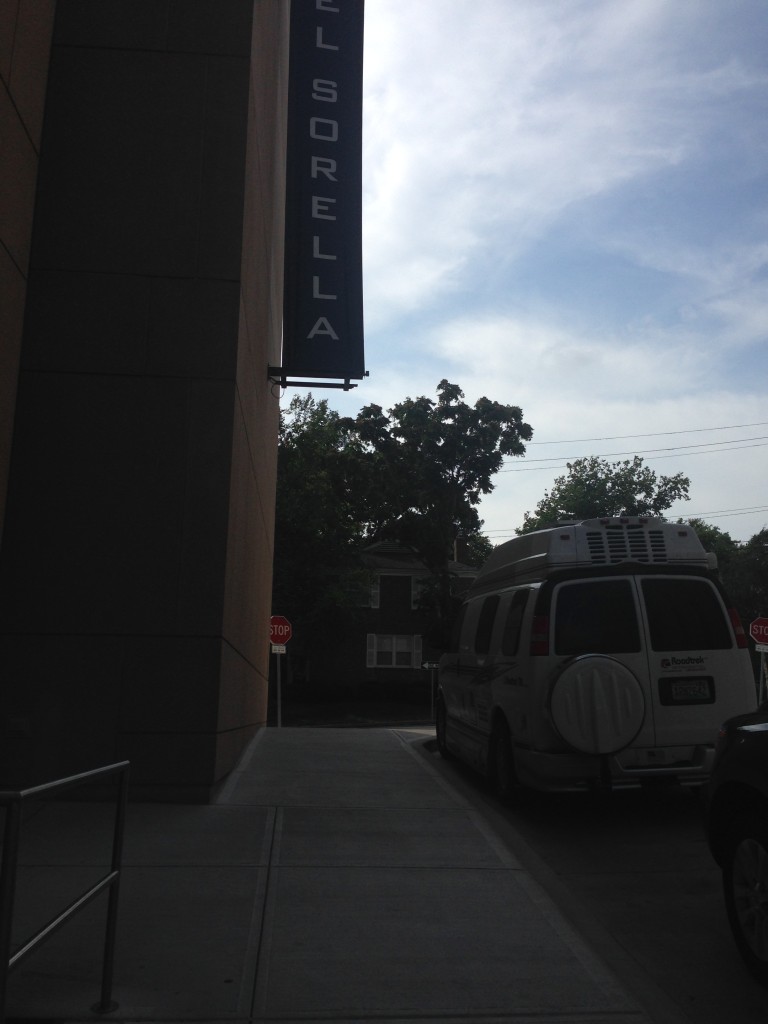 Rock star parking came in very handy for the mobile RV repair service. I’d planned on staying at an RV park in Kansas City the night before I was due at the hotel but then something happened. I mentioned it’s been super super hot, right? Like over 100 degrees. They do public service announcements about not being in a parked car without air conditioning in this kind of weather.

I was at the RV park, all happy and relaxed and cool with my awesome air conditioning. I popped over to the park store to get some iced tea and when I came back – the air conditioning was gone. What? I checked the outside breaker (the electric hookup always has a dedicated breaker) and it was flipped, so I reset it. Then I reset all of the breakers on the box inside the RV. Still no air conditioning.

Well, what now? The fan + open windows only go so far in this kind of weather, which is to say, I’m pretty sure I would die. Or at least not be happy and cool. And I am really into being happy and cool.

So I headed over to the hotel a day early and spent the evening at the rooftop bar. (I know, my life is full of such tragic consequence.)

I had a mobile RV repair service come out and take a look while I was giving the workshop. The guy called after the visit. “It’s all fixed!”. OK, great, what was wrong though? Hilariously, he really only wanted to tell me that he’d fixed it, not how he’d fixed it.

Turns out, I had not quite reset the breaker enough. I needed to really flip the switch. I guess I only mostly flipped it. So he flipped it harder. Heh.

When I got back to the RV a few days later and got ready to set out again, I realized he’d done one more thing: turn off my battery. (Why?) With the battery off, the refrigerator is also off (even when it’s running on LP), so everything in the refrigerator had gone bad. And also didn’t smell awesome. So that part really was sort of tragic.

When I was in high school, I went through a series of cars that shouldn’t have been driven by anyone, least of all a teenage girl in a world before cell phones. Said cars included: a 1974 Plymouth Duster, a 1965 Ford Falcon, a 1980 Mazda GLC, and several non-descript Datsuns and Pintos. I drove the Duster my junior year of high school and in the winter, I’d have to let it warm up for about twenty minutes before I could drive it to school.

The glass half full view is that I learned A LOT about cars. Or at least, a lot of what can go wrong with cars. I know what it sounds like when a car runs out of oil, when the mechanic doesn’t tighten the spark plugs when replacing them and one pops off, when the brake pads are gone, when the CV joint needs to be replaced. What happens when your clutch goes out. How to pop a clutch to get a dead car started.

I’ve learned that even though I technically know how to change a tire, I’m not strong enough to get the lug nut off so why even try. I’ve changed my own oil (you don’t actually save any money, so that ends up being a lot of time and energy for no good reason), been stranded in the middle of nowhere on the freeway at 1am and been picked up by a trucker (the insides of those cabs are crazy!), and scammed a scamming mechanic with his own scam (he sold 16 year old me a used car that he’d claimed was inspected (it was not) and in top shape (it was not), but actually had a cracked engine block (although he did not know that because he had not done the inspection he claimed he did); once I broke down and the truth was revealed, I conspired with a tow truck driver who towed it a block from the dealership and I drove it up (the engine didn’t overheat and reveal its true nature until several miles of driving) and sold it back to the guy, who thought he was scamming me twice by paying me less than I bought it for).

I suppose all of that breaking down and being stranded and realizing a mechanic left a wrench in your engine and that’s what the rattling sound is prepared me for driving an RV around the country. I generally know what to watch out for (oil levels, tire pressure, water temperature and the like) and know that if something were to happen (I would rather nothing happens though thank you), I will be OK.

As I was driving through California, I noticed my tire pressure was wildly fluctuating. Like the tires would all get together in a huddle and say, hey, let’s be super low right now! Oh wait – I know! Let’s be super high! I can monitor the tire pressure from a display on the dashboard and I had read that correct tire pressure was pretty important since the RV is so heavy. The factory settings are 50 in front and 80 in back, but I had read that 60/80 is better (plus I talked to another Roadtrek owner in Carpenteria who said he kept his tires at 60/80. And everyone knows that one anecdotal validation of something one reads on the internet means it’s doubly true).

I kept stopping to put air in the tires, and it was nearly impossible to fill them evenly. Plus the whole irritating issue of the tires being low, so I’d fill them with air, only to have them shoot up high an hour later. Exhausting.

Heat can make tire pressure go up and I was about to embark on the no services trek across the desert. It was 105 degrees outside and so the asphalt road was probably about 1250 degrees. When I got the tires replaced, I was talking to the mechanic and he said, “oh yeah. I have a boat trailer and every time I do that drive I blow a tire.” Well, that was something to look forward to.

He suggested nitrogen. Which apparently is used to fill the tires of the space shuttle. And NASCAR cars. So you know it’s super bad ass. Of course I had to have it. Also, nitrogen isn’t as sensitive to temperature so once you fill the tires, they basically stay put even when you’re driving across asphalt that could double as the surface of the sun.

I stopped by a tire place that swapped out my air for nitrogen. When I drove away, my RV told me this:

So I drove in circles.

I made it across the desert with zero blow outs, which is exactly the number I was hoping for. And my tire pressure has been pretty constant so no more messing with gas station air nozzles (which is fortunate, since I don’t think you can drop a quarter in and choose nitrogen in any case).

My friend lives way out in the middle of nowhere, and the drive to her place was like a video game where all of your past levels come back in a complicated maze of obstacles. Washed out roads from the flooding: check. Steep downhill grades: check. Dirt and gravel surfaces not ideally suited for balding tires: double check.

Like Mario or Donkey Kong before me, I persevered. And was soon rewarded with homemade applejack moonshine.