Mastodon Sandusky, Ohio: The Town With the Non-Unique Boy And a Boot - Girl Meets Road Skip to the content

I’ve never been to Sandusky, Ohio. I’ve never been to Ohio at all. But I’ve been hearing about Sandusky all my life. Sandusky was my grandma’s home town. My grandpa was stationed near there before shipping out to World War II and that’s where he met my grandma. They got married there, in her family’s Catholic Church.

I never knew Cedar Point, the amusement park, was something anyone else knew about but me. I envisioned it as a tiny boardwalk that my grandma would go to as a kid. Even now when someone mentions Cedar Point, I think, how do you know about that place? Did you hear my grandma’s childhood stories too?

I got to Sandusky by way of Hannibal, Missouri, and Chicago, and the RV Hall of Fame and Museum in Indiana, stories for another time.

I found an RV park just outside of town and pulled in without warning, as I generally do.  As is often the case, I was a novelty to the staff: a girl by myself, not even any pets, no reservation, in a funny little Roadtrek. A big class A pulled in at the same time, also from Washington state. They were relieved to finally get there, as a bridge was out and they had a hard time following the detour signs.

They joined in the wonderment of my situation.

A spot was found and no sooner had I pulled in that I pulled back out again, followed the detour route, and headed to downtown Sandusky.

I had a burger and a beer right on Lake Erie at the Sandusky boat ramp. Sometimes, you can overnight for free at boat ramps, which I’m assuming is what the permit would be for?

I drove to my grandma’s childhood home and then walked over to the Holy Angels Catholic church right around the corner. My grandparents got married here in 1946.

It was closed. What? Aren’t Catholic churches open all the time, in case you need to escape from vampires or a safe refuge from being tracked down by a secret branch of the government for a crime you didn’t commit? Hollywood has tricked me yet again.

But maybe not with the small town America stuff.

As I drove towards the beautiful town square and the beautiful brick buildings, right on Lake Erie, I thought: the small town of the movies really does exist.

I had gotten there just in time for Cruisin’ By The Bay, the big annual car show. My grandpa would have loved it. 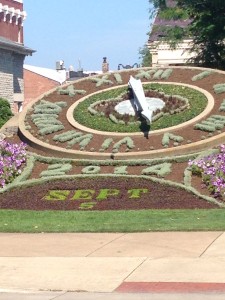 Does someone fashion flowers with today’s date every day? (Apparently yes.)

And here’s the boy with the boot: 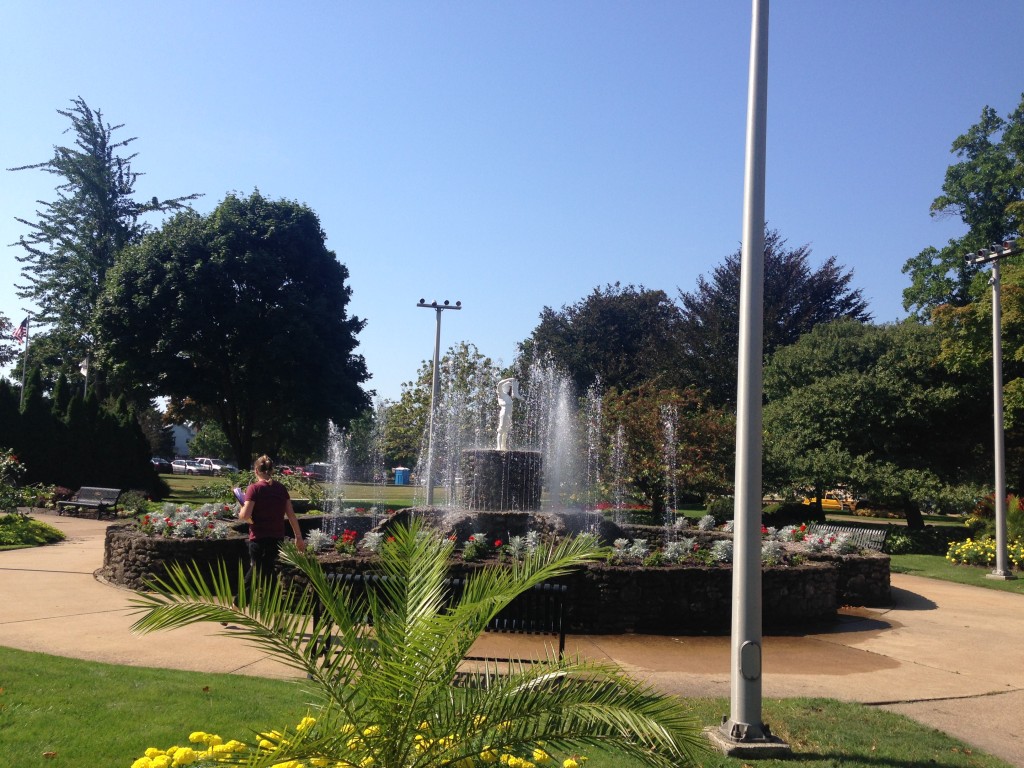 I read that he was a replica of the real boy with a boot, who was encased in glass in the county courthouse. So off I went.

Roadside America (an awesome site, with an even awesomer phone app, which I first learned about from my awesome friend Kieca) notes that lots of towns have boys with boots, all for apparently unknown reasons. It also notes that some of them take the statues in for the winter. The downtown Sandusky statue’s plaque noted the same! (The version of the Sandusky statue origin story recounted on the Wikipedia page is debunked by Roadside America, and if we can’t trust Wikipedia about the boy with the boot statue, what can we really believe in this crazy, mixed up world?)

But wait, what? The official symbol of Sandusky is not unique to Sandusky? There are at least 24 and perhaps hundreds of others of towns with the same symbol? (Apparently one is even in Seattle?!) Yeah, that was news to Sandusky as recently as 2013. Just look at this sad headline from the Sandusky Register: 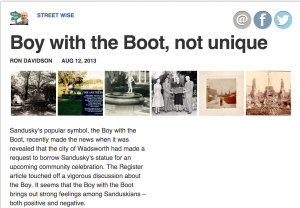 The article notes that the supposed German immigrant turned successful Sandusky businessman, who presumably had returned to his home country to bring back this unique statue, was actually born in the United States (and likely had never set foot in Germany) and had ordered the statue from a New York catalog as a kind of marketing display for his hotel. He created a local park with several statues, including “this little boy, cast from zinc, was in the center of a fountain, surrounded by statues of Venus and of dolphins.”

And wouldn’t that have been a site to see.

3 replies on “Sandusky, Ohio: The Town With the Non-Unique Boy And a Boot”

Cedar Point is the AMAZEMENT Park! Home of all of our end-of-school-year road trips throughout high school and beyond. Now that I’m old (uh, oldER) I am probably more fond of Put-In-Bay, but still love Sandusky and Cedar Point in that nostalgic pretend-its-1988 way.

Just happened upon this blog. So glad you were able to experience grandma’s hometown. Your mom and Aunt Mel and myself went back for a visit after grandpa passed away, and we have the greatest memories from it. P.S. The boy with the boot held a special place in your grandma’s heart!😂

I was searching for “Boy and a boot” information. I always called him, “the boy with the boot.” I know different now. I am born and raised in Sandusky and enjoyed your posting. Sorry Holy Angles was not open. All three catholic churches have merged and are open at different times as the population has decreased no need for all three to be open at the same time. Thanks!