I don’t remember it being this hot, but I remember being this sticky. I’m drenched the minute I walk outside. I watch the water skiers and the speed boats and the jet skis. I can almost taste the cheap 3.2 beer. 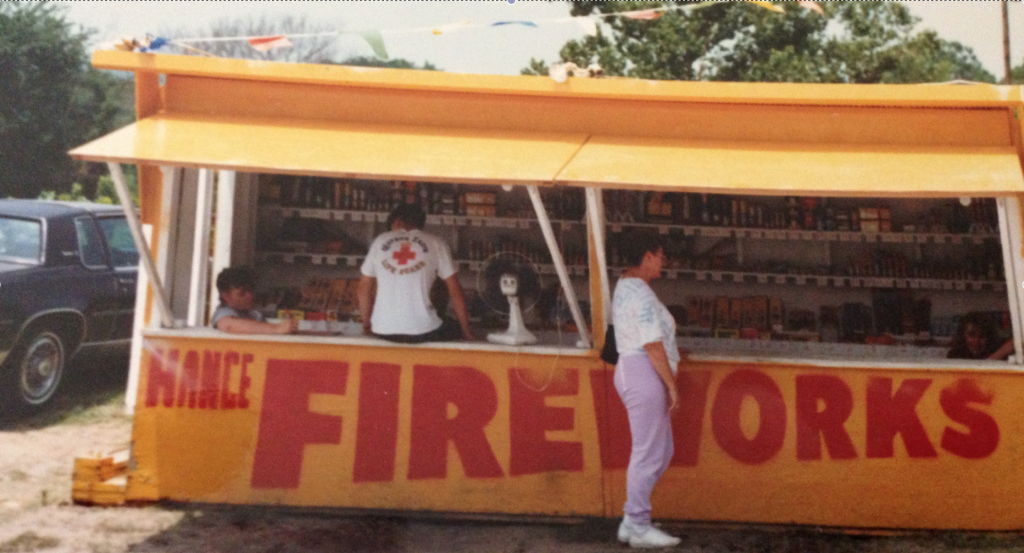 (That’s me in the shadows, far right. My grandma is in front.)

Four of us worked there, so we’d trade off working the stand and drinking beer at the lake. 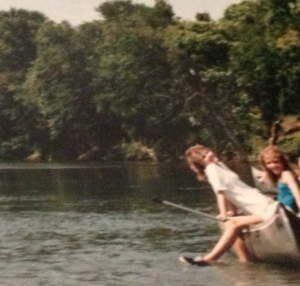 I could have also picked a campground at the Illinois River. It’s funny how you forget things and then something reminds you and it all comes rushing back. The Tulsa hairdresser intent on making me blonde mentioned she’d been to Tahlequah the previous weekend to “float the river”. Ah yes. Floating the river. It all came back. Ice coolers of beer floating with you. Just floating. All day long.

She also mentioned how if you float the river, you have to expect that everyone around you is going to be loud and rowdy. Ah yes. I remembered that too.  Maybe the river wouldn’t be the best peaceful spot for me to camp out.

This other photo, by the way, is my sister and me floating the river in a canoe (you can also make the trip via inner tube). This was a tamer trip, with my parents and grandparents. Yes I have a perm. Everyone had a perm. Everyone.

So I’m here. At Cherokee Landing. It wasn’t even on purpose. I was driving towards an RV park and drove right by the stop where the fireworks stand used to be. I backed up and drove down towards the lake. It was peaceful and pretty and quiet, so I decided to stay. 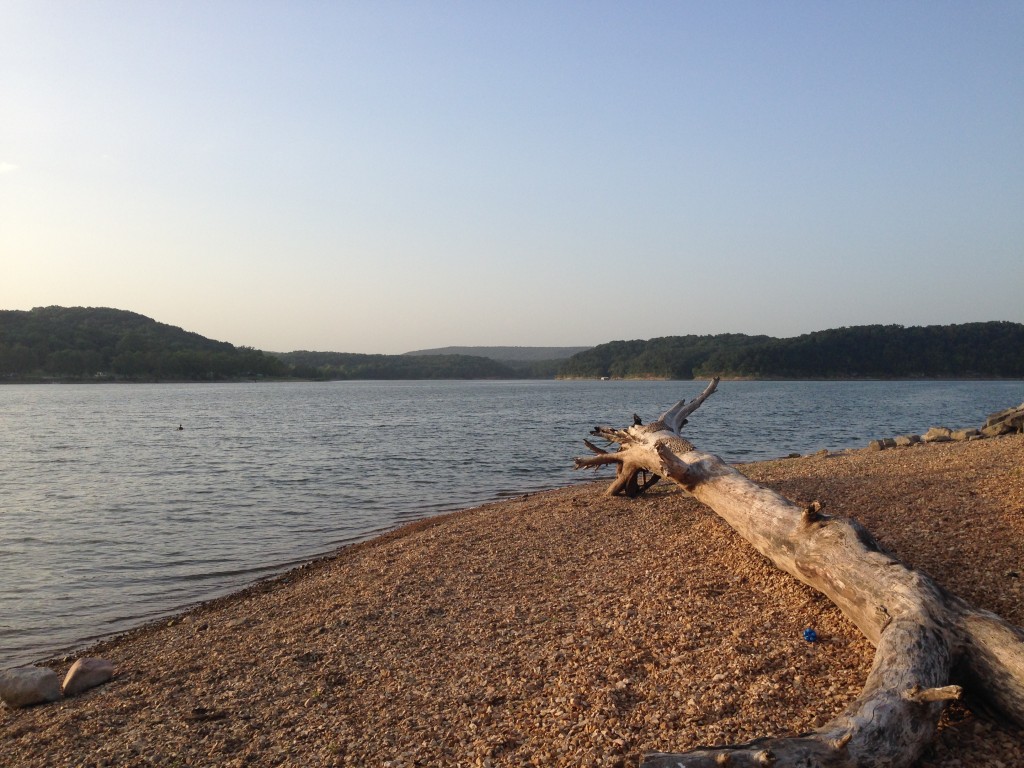 I pulled up to the ranger station. He told me to just pick a spot and they’d come by eventually to collect payment. (Which they did, two nights later with a loud knock on my door in the dark. A ranger in his 60s was standing there. I was not happy. “You don’t do this at night. You come by during the day. I’m a woman alone and I don’t open my door to strangers in the dark!” He was startled. “And you shouldn’t! I wouldn’t either!”.)

It’s beautiful, sure. But here’s the problem. Mud daubers. For those not familiar, mud daubers are big black wasps that build nests out of mud. And they’re part of nature in this part of Oklahoma. They’re not aggressive and generally won’t sting you, although Wikipedia, after calmly explaining how non-dangerous they are, casually drops in that they’ve caused several plane crashes that have killed everyone on board (one with 189 people). Wait, what? Now I have to be afraid of that too?

Anyway, my immediate concern is not flying. It’s showering.

The bathroom is where the nests are. And I really can’t step foot in the building with the swooping, buzzing wasps, much less shower in there.

Which is awesome because finally I have a chance to check out my RV shower!

The first step is to get hot water. The way this works is I press the “on” toggle for the hot water heater. The pilot light ignites itself, the propane kicks in, and in about 15 minutes — like magic — hot water!

Next, I turn my hallway into a shower. I do this by removing a panel from the floor to expose the drain, opening the bathroom door, then pulling the shower curtain around the track.

I had read some reports of water getting everywhere, but that’s not my experience. The water stays in the shower area, the pressure is great, and it’s as fine a shower as I’ve taken so far!

I take a walk while I enjoy my morning coffee, before opening my laptop for another day of work. 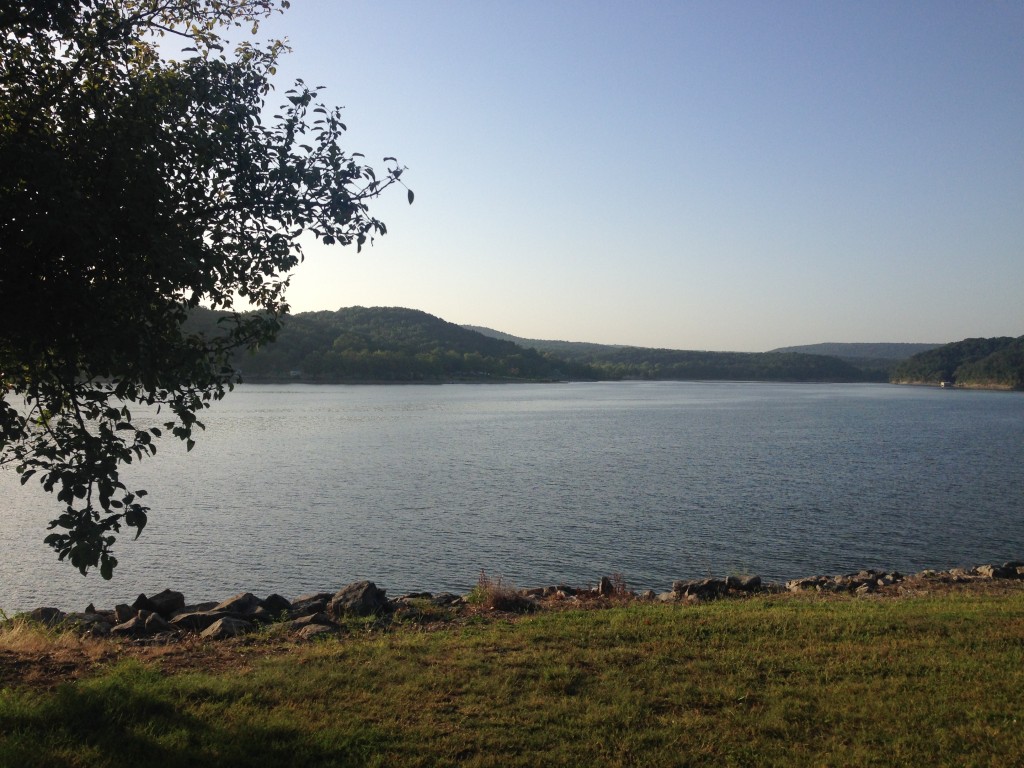 4 replies on “Tenkiller Lake: A Study in Mud Dauber Avoidance”

I had no idea Tenkiller Lake was a real thing. I thought it was a made up place from that Tom Waits lyric in Swordfishtrombone: He went to sleep at the bottom of Tenkiller Lake. / He said, “Gee but it’s great to be home.”

Real! I have years of high school memories of drinking lots of beer at Tenkiller Lake! And now you’ve seen the pics that prove it!

I am calling foul. You can not keep describing these miracles of RV presto change-os without photographs. Seriously you can’t.

Oh! I have a whole post I’m working on showcasing the RV’s transformative powers! Pics and video!